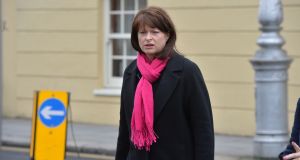 Emily Logan, chief commissioner of IHREC: “a decade on from Ireland signalling its intention to ratify this UN protocol, substantial progress has yet to be made”. Photograph: Alan Betson

Ireland has yet to ratify a UN agreement allowing for the inspection of places of detention despite the then government signing it a decade ago today.

While some places of detention, such as prisons, have their own inspection regimes, others such as Garda stations and facilities for some immigrants are not inspected by any State body for human rights abuses, according to a report by the Irish Human Rights and Equality Commission (IHREC).

The commission is calling on the Government to establish inspection regimes which will cover all places of detention including areas where gaps currently exist. The report also suggests that “de facto” places of detention, where residents are allowed to leave but often cannot for practical reasons, should also be inspected regularly by the State. These include direct provision centres, nursing homes and facilities for disabled people where their doors are locked.

The IHREC is releasing the report on Monday to highlight the State’s continued failure to ratify the Optional Protocol to the UN Convention against Torture (OPCAT).

Under the protocol, states must “set up, designate or maintain at the domestic level one or several visiting bodies for the prevention of torture and other cruel, inhuman or degrading treatment or punishment”.

These bodies and the UN’s Subcommittee on Prevention of Torture must also be given unrestricted access to inspect places of detention.

Emily Logan, chief commissioner of IHREC, said that “a decade on from Ireland signalling its intention to ratify this UN protocol, substantial progress has yet to be made”.

She said ratifying the protocol would “significantly strengthen inspection and monitoring processes in places where persons are deprived of their liberty, from Garda stations to residential care facilities”.

The report highlights several areas which are not covered by inspections, including prison transport, cells in Garda stations and the military detention facility in the Curragh Camp or at other military bases.

It also raises concerns about the practice of sending children with special needs overseas for treatment in secure care institutions when the Health Service Executive cannot provide treatment in Ireland. The report states it is not clear who has the authority to inspect such facilities.