Number of homeless children in Ireland over 3,000 for first time

Decrease in child homelessness in Dublin, but increases across the rest of the State 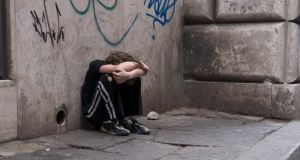 The total homeless population in August this year was 8,270, compared with 8,160 in July and 6,611 in August last year. Photograph: Getty Images

The number of homeless children across the State has risen above 3,000 for the first time, latest figures from the Department of Housing show.

The most dramatic increase in the monthly figures was in counties Limerick and Clare, where child homelessness increased by 84 per cent between July and August this year.

The national data, for the week 21st to 27th August, shows a slight decrease in family and child homelessness in Dublin, the mid-east, and midlands regions, though increases across the rest of the State, compared with July.

In Dublin last month there were 2,379 homeless children, in 1,146 families. Of these 64 per cent (733) were headed by lone parents. This is a slight decrease since July, when there were 2,243 children in 1,178 families in emergency accommodation.

In the north-west (Donegal, Leitrim and Sligo) there were no families homeless in July this year. Last month eight children in three families became homeless.

In a statement the Department of Housing said: “While the number of family presentations nationally in August has increased by 13 overall, the figure for Dublin has fallen by 32.

“Given that there were 102 additional presentations in Dublin, the overall reduction in the number of homeless families in Dublin is 134. The opening of further family hubs/facilities in the coming weeks and months will further assist in meeting the needs of families in emergency accommodation.”

Niamh Randall, spokeswoman for the Simon Communities in Ireland however described the continuing escalation in homelessness as “very worrying”.

“This crisis is continuing to escalate because as people move out of emergency accommodation, more people come in to take their place. We call on Minister Eoghan Murphy to urgently publish the review of Rebuilding Ireland which will indicate the Government’s commitment and determination to tackle this crisis head-on.”

“While there is a small drop in figures in Dublin, across the State the homelessness problem is growing.

He says in the absence of measures such as more protection for tenants in buy-to let properties the problem is likely to keep on getting worse.