March for Choice: everything you need to know

Thousands expected at sixth annual March for Choice in Dublin 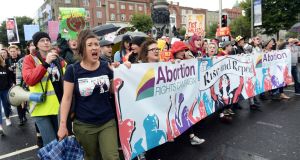 Thousands of people are expected at the 6th annual March for Choice in Dublin on Saturday.

What’s the march about?

The march is an annual protest against the Eighth Amendment to the Irish Constitution which equates the life of a foetus with that of the pregnant woman.

Who organised the march?

The march is organised by the Abortion Rights Campaign.

When is it on?

Organisers have asked marchers to assemble at the Garden of Remembrance on Parnell Street in Dublin at 1.30. The march will commence at 2pm.

The procession will leave at 2pm and go down O’Connell Street and past the Custom House. From there, the march will go across the river to the south side of the city and on towards Merrion Square. There are notable posts on the march route, among them the Irish Family Planning Association head office on Pearse Street, and the National Maternity Hospital on Merrion Square.

Will there be speeches?

Among those speaking at the end of the march in Merrion Square will be Bernadette Devlin McAliskey, Gerry and Gaye Edwards of Terminations for Medical Reasons, poet and trans rights activist Matt Kennedy, Kate McGrew of Sex Workers Alliance Ireland and representatives from Migrant and Ethnic-Minorities for Reproductive Justice. Comedian and actor Tara Flynn will act as MC. British Labour MP Stella Creasy will also march at the event after speaking at The Irish Times Women’s Podcast in the Irish Writer’s Centre, Parnell Square at 12pm.

Similar marches are also taking place in more than 20 other cities arond the world.

1 Coronavirus: Warning of similar measures for other counties as Donegal moves to Level 3
2 Aer Lingus staff say they are living in ‘near poverty’ and unable to cover rent
3 Australian man found guilty of murdering Irishwoman Ciara Glennon in 1997
4 Séamus Woulfe: The last man standing in Golfgate is set to learn his fate
5 Covid-19 Q&A: How are we doing, is there any good news and what happens now?
Real news has value SUBSCRIBE