‘Three years of hell’ – partners of Jobstown protesters speak out

‘We have to listen over and over to how Joan Burton is a victim. We’re victims’ 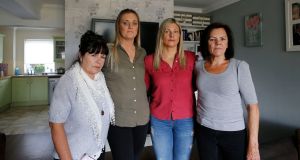 The past three years, since the Jobstown anti-water charges protest, have been “hell” for the families of those charged over the incident, according to their wives and partners.

They say they have suffered emotionally, mentally and financially and their community has been subjected to “hate journalism” and commentary.

A total of 27 people were charged for their role in the incident in November 2014 when former tánaiste Joan Burton and her adviser Karen O’Connell were prevented from leaving in their car after a graduation event at An Cosán in Jobstown, west Dublin.

Ms Burton has described the events as “terrifying” and the 40-day trial, which resulted in the acquittal in July of six of those charged with false imprisonment, as “very trying”. She was grateful for the court’s victim-support service, she said. Charges against a further 10 were formally dropped on Monday.

Lisa Murphy-Maher is the wife of Solidarity councillor Mick Murphy. Stephanie Laffan is engaged to Scott Masterson. Both men were acquitted in July.

Lorraine Kane is married to Declan Kane and Marion Herbert to Peter Herbert. The charges against their husbands were dropped on Monday.

“We’ve been a bubble of stress,” says Ms Murphy-Maher. “It’s only now it’s over, and the relief, that we realise the stress and what we are after going through. This happened to us and our families. It has been three years of hell.

“We want to talk about this, not for political reasons but, because we have to listen over and over to Joan Burton and how she is a victim. We’re victims. She is an older woman. Well I am an older woman. So is Marion. Our beautiful men were found not guilty in a trial that should never have happened and no one asks how the families are.”

Although Lorraine Kane, who was at the protest, says Ms Burton “must have felt a bit uncomfortable in the car” for over two hours while protesters chanted and used abusive language, she and the others insist neither the Labour TD nor Ms O’Connell were in any danger.

They described the early-morning arrests in February 2015 involving, they say, up to 10 gardaí, at their homes and in front of children. Mr Masterson was handcuffed, her fiancee says, in front of their then four-year-old daughter just as the couple were preparing to leave for work. “Orla was scared. She was crying. She had never seen anything like that.”

Ms Herbert’s husband had recently had serious surgery. “I was very worried how it would affect his recovery. It was a constant worry.”

They heard their partners would be charged, in September 2015, not from the gardaí but on the news. “That didn’t happen by accident. It was all leaked, planned between politicians, the guards and the media,” says Ms Murphy-Maher.

The families suffered financially. Mr Masterson had to employ someone to keep his courier business running during his trial, while Mr Kane was unable to work as a security guard after being charged.

It was when a 17-year-old was found guilty at the Children’s Court in connection with the protest, in October 2016, that they feared the worst.

Ms Laffan says: “That’s was when I got really frightened, thinking, ‘Well if [Scott] goes to prison, what about us? How will we cope? How long will I be on my own with the kids? Six years? Eight years?”

The youth in the Children’s Court case was discharged conditionally on good behaviour for nine months.

Relationships also came under strain, the women say, as they attempted to “take the stress from the men” but they also worried themselves.

They said they found great supportin the Jobstown Not Guilty campaign, which saw hundreds of people from the community fund-raising, marching and gathering evidence – including crucial phone footage of the protest – for the defence. “All the evidence that freed them, we got that ourselves,” the women say.

Now, hugely relieved that their partners’ names have been cleared, they remain angry at what they see as their continued demonisation in the media and by some politicians. They say the reasons for the protest on the day remain ignored.

“After the ‘not guilty’ verdict, the media was disgraceful – some of the stuff they were coming out with, saying it was social media had got them off,” says Lorraine. “As if they shouldn’t have got off, never mind about the Garda lies and the video showing what really happened. I wouldn’t trust the media any more.”

The protest, says Ms Herbert, was not just about water charges. “It was about everything. There is poverty around here. It was about disgraceful cuts, how they were affecting women.

“People are losing their homes. Homelessness. People killing themselves. Ten people just around here have killed themselves in the past year. There are food banks in this community. Are people supposed to be not angry? The people protesting were people wanting to make a better world for the future.”

They see the arrests and the charges as an attempt to “intimidate” people into not protesting.

“Absolutely,” says Ms Laffan. “That’s why they reacted so badly to protesters, calling us ‘the dregs’ and thugs and criminals, trying to push us back.”

If that was the purpose, they believe it backfired, as many in the community have become politicised.

“Well they won’t push us back,” says Ms Kane. “Not a chance. We’re more determined than ever.”