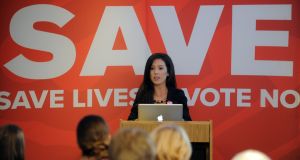 Marie Donnelly at a press event held by nurses and midwives to publicly call for a No vote in the referendum to repeal the Eighth Amendment. Photograph: Aidan Crawley

Proposed abortion legislation could force nurses and midwives out of a job, it has been claimed.

Campaigners for a No vote in the referendum on the Eight Amendment say the conscience clause promised by the Government in legislation if the measure passes is inadequate.

“We are concerned about freedom of conscience and have seen how Scottish midwives lost their case in the UK not to be involved in abortions,” said Mary Kelly Fitzgibbon, of Nurses for Life, a nurse, midwife and a lecturer.

A conscience clause in the proposed legislation would mean passing the care to somebody who would “facilitate” the termination of the pregnancy. “So that would mean that we would be co-operating in the act of abortion,” she told a press conference on Friday.

“I know, working in London, it was quite a grey area. It’s quite clear in the general scheme of the legislation that we would be required to facilitate [abortion],” she said.

“For many of us, because that is against our core belief of upholding the right to life of both the mother and baby, we could no longer practice. So that has real implications,” she said.

In 2014, the supreme court in London decided the right to conscientious objection in abortion cases did not extend to labour ward co-ordinators.

Marie Donnelly, a nurse from Kerry, said : “When Simon Harris says late-term abortions are prohibited I ask him, ‘Show me where. Tell me where it is in the Bill. Find me the line that says that.’ Because, Simon, I have read the Bill and I cannot find it anywhere.”

Kerry psychiatric nurse Catherina Ní Shuilleabháin explained how her daughter was “living proof that the Eighth Amendment is a good thing. Had there been an abortion clinic in Kerry, had there been a doctor handing out pills in Kerry, I could have easily had an abortion and told nobody. I did not have an abortion. I had a baby.

“In Britain and in other jurisdictions women like me don’t think twice, because it’s normal. It is the done thing, it is what is expected of you. In this country we are so close to importing that culture, a culture that says life is not a gift, it’s a problem,” she said.

“The Yes side hates it when women like me speak out because they say there are no women like me,” she said. “The message comes out from them every single day that women like me cannot survive being a mother; that a crisis pregnancy is the end of the road for us,” she said.” Together for Yes never mentions the baby – ‘baby’ is their kryptonite.”

Ann Flynn, a nurse from Offaly, said she was “gravely concerned at the consistent emphasis on very rare cases”, in the referendum debate.

“I read that women are treated as vessels – that is rubbish. We have had a sustained campaign in Ireland to essentially slander the entire health sector.”

It was “offensive, it is nonsensical, and those pushing this narrative should be ashamed”, she said.

“If you vote Yes on May 25th, you are voting for a horror show. You’re voting for death on an industrial scale,” she said.

Meanwhile, in a pastoral letter Catholic Bishop of Killaloe Fintan Monahan has warned that the proposed post-referendum abortion legislation would allow “unrestricted access to abortion” and “make the regime in Ireland one of the most liberal in the world”.

It would “also make abortion available on unspecified health grounds for up to six months. Our Constitution is the people’s law – only the people can change it. If we remove the constitutional protection for the unborn, we are giving permission to a future Dáil to introduce an even more liberal law,” he said.