Irish women can be trusted to make the right decisions about their treatment, says medic 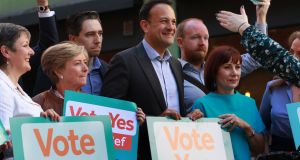 Fine Gael pressing for a Yes vote in the upcoming referendum on the Eighth Amendment. Photograph: Nick Bradshaw

The Eighth Amendment should be repealed as it is causing uncertainty and difficulty for doctors and delaying the treatment of seriously ill women, a gynaecologist has said.

Speaking at the launch of Fine Gael’s Yes campaign in Cork, Prof Richard Greene said the amendment and the termination of pregnancy were difficult issues with both sides of the debate offering opposing views as to how it affects practitioners and patients.

“How does it affect me as a clinician, dealing daily with women and I’ve been working in obstetrics and gynaecology for nearly 30 years? I would say the simplest message I would give about the Eighth Amendment is that it muddies the water –we just don’t have clarity about how we should practise,” said Prof Greene, who works at University College Cork and Cork University Maternity Hospital.

He offered examples of how the amendment, which guarantees an equal right to life to the mother and child, has an impact on his work at the hospital. He cited the case of a woman he called Sheila, who presented at 13-14 weeks pregnant with her cervix already open in a pregnancy that she really wanted.

“Sheila’s water bag around the baby had gone, the chance that this baby would survive is about one or two in 1,000. The chances of that baby’s lungs developing are limited and the risk of infection is very significant and we have to achieve another 10 weeks of pregnancy to get her to a viable gestation,” he said.

“But I have to actually wait until her life is at risk to do what I know is an appropriate treatment. Yes, the 2013 Protection Of Life in Pregnancy Act will allow me to act once her life is in danger but effectively the Eighth Amendment is dictating a tardiness for both Sheila and myself.”

Prof Greene also instanced the case of a woman he called Nancy who presented with an ectopic pregnancy, in which the foetus was outside the uterus and unviable. She was also showing signs of bleeding which put her life at risk, he said.

“We discuss it with Nancy and her partner. The decision is made to treat her surgically and remove the pregnancy. There is a heartbeat but they accept that it is the appropriate treatment and it meets all the legal requirements,” he said.

“However, I leave her and I am called to come back and counsel her again because she overhears a conversation where one staff member says to the other, ‘Is this legal, the baby’s heart is still beating?’ So the correct choice of care is being questioned because of the Eighth Amendment.”

Prof Greene also gave the example of a couple he named Martina and Joe who suffered “a profound loss of pregnancy at 38 weeks when their baby was stillborn” and three subsequent miscarriages before Martina became pregnant again only to discover the baby had anencephaly.

“This baby is not going to survive, it may be born alive but it will not survive. They were devastated given their story but they were absolutely horrified at the idea we had to wait for the pregnancy to proceed and go to the end of the pregnancy, knowing there was nothing to get out of it,” he said.

“And the question they were asking was why cannot we do something now so that we can at least try again and hopefully have a child and I saw the horrendous pain they went through. In the end, the Eighth Amendment was adding to their grief and mental trauma.

“They eventually went to the UK for a termination but they are still pained by all of this. They never had a baby to take home, they had no burial place, they had no service with their family. Martina’s physical life was not in danger but they are psychologically traumatised because of it.”

Prof Greene accepted some believe the floodgates would open if the Eighth Amendment was repealed but the evidence from Eastern Europe and some US states where free contraception and early healthcare were provided suggested the number of terminations can be reduced multifold.

“I trust the women I looked after in pregnancy and I can honestly tell you they make good decisions after much consideration before they undertake a termination. The Eighth Amendment is affecting women and doctors in providing good healthcare and that’s why I’m supporting a Yes vote.”