Save the 8th campaign denies any conflict over late abortions 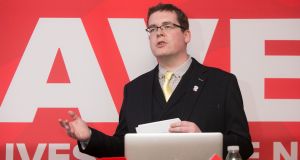 John McGuirk: “We support terminations as far as practicable when a mother’s life is at risk.” Photo: Gareth Chaney Collins

The Save the 8th campaign has said it has no issues with late-term abortions when a mother’s life is at risk but opposes late abortions when her health is under threat.

The group’s spokesman John McGuirk denied there was a conflict between its acceptance of late-term abortions when a woman’s life is at risk and its campaign criticising all terminations up to six months of pregnancy. Its posters do not make exceptions for when a mother’s life is at risk.

Mr McGuirk said he had no difficulties with the Protection of Life during Pregnancy Act, which allows for terminations when a mother’s life is at risk including by way of suicide. The Act does not include any gestational limits.

Speaking to The Irish Times, Mr McGuirk added: “Our position is very clear. We support terminations as far as practicable when a mother’s life is at risk. If it is at eight and a half months of pregnancy, we are absolutely fine with that.

“Where we have difficulty is the grounds on mental health and the vague wording in the legislation.”

The posters from Save the 8th campaign say the Government is seeking to legalise abortion up to six months. However Mr McGuirk insists the time period is not the issue, rather the grounds that the termination could be provided on.

Under the proposed legislation from the Government, terminations will be only provided beyond 12 weeks when a mother’s life is at risk, or when there is a risk of serious harm to her health. Abortion will also be accessible if there is a diagnosis of a fatal foetal abnormality but no gestational limits will apply in these circumstances.

Mr McGuirk said the difficulty he has is with the wording of the legislation and the “failure to define what serious harm to health means”.

This will result in “aborting healthy babies” up to six months, Mr McGuirk claimed.

Asked if he believed that the “aborting of healthy babies” was the case when a mother’s life is at risk, he said it was his belief that the woman’s life should come first and that is why he had “no issue” with the current laws.

The anti-abortion campaign opposed the introduction of the Protection of Life During Pregnancy Act due to the inclusion of suicide in the legislation.

There has been a total of 77 terminations under this legislation since its inception in 2014. Seven of those have been on the grounds of suicide.

Separately, the Iona Institute has said the Government is “deeply dishonest” in suggesting that its proposed abortion law is restrictive.

The Christian advocacy group said what is proposed by the Government is similar to laws operating in countries such as France, Italy, Denmark and Italy which have liberal abortion policies.

She said even Britain does not allow abortion on request up to 12 week as two doctors need to approve, though she suggested this was just a “fig leaf”.

Under the proposed Irish law, she maintained “we will have healthy babies being aborted by healthy women. We do not wish to see that situation coming into this country. We don’t think it is necessary either for the women or for the babies. That fundamentally changes the legal and cultural landscape of this country too.”