Historic monument in Dublin to be used for the homeless

Use of one of Dublin’s oldest buildings for shelter ‘unacceptable’, says Civic Trust 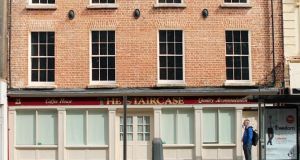 Dublin Civic Trust is opposing plans to convert one of Dublin city’s oldest recorded buildings, which is a registered historic monument*, into a homeless hostel.

However, the civic trust said this would contravene the building’s planning permission, could compromise its historic fabric, and would be a “completely unacceptable” use of a “culturally significant building”.

Aungier Street was laid out in 1661, more than 10 years before St Stephen’s Green, as a residential street for the elite. Chosen for its proximity to Dublin Castle, it gave rise to a new type of house, the “city mansion”.

These houses, were the grandest in pre-Georgian Dublin and provided the template for later buildings such as the Mansion House.*

In the 1990s the civic trust restored 21 Aungier Street, which was derelict and under threat of demolition. It was one of the first mansion houses to be restored on the street and spurred the conservation of others including number 9/9a which dates from 1664.

Before and after: 21 Aungier St

The trust sold number 21 and permission was granted in 1997 for its use as a guesthouse, with conditions relating to the preservation of medieval timber partitions and beams, chimneys and walls, as well as a prohibition of subdivision of the ground and first floors.

More recently it was used to accommodate asylum seekers. Civic trust director Geraldine Walsh said while this was an unauthorised use, the trust decided not to object, but feels its use as a homeless facility will require significant damaging interventions to the building.

The trust recognises the need for housing in the city, she said, but “the intensity of use resulting from a transient form of medium-term accommodation, as distinct from managed, short-stay leisure use under the authorised planning permission, has the potential to have a deleterious impact on the delicate historic fabric of the building over the longer-term.”

Independent councillor Mannix Flynn said not only was the use of the building inappropriate, there was an unreasonable concentration of homeless facilities in the area.

“There are three other shelters in the immediate vicinity. This is one of our most historic streets and it is at risk of ghettoisation, which will affect businesses, residents, but also the homeless people themselves.”

A spokesman for McVerry Trust said it recognised the historic significance of the building and was working with conservation architects in relation to its reconfiguration for homeless accommodation.

“We are very much aware of the building’ importance and will only be maintaining and not interfering with its historical features.”

The facility was required because its leases on two other buildings were coming to an end shortly, he said.

In a statement, Dublin City Council said the proposed use of the building “does not contravene planning” due to its previous use by the Department of Justice for asylum-seekers.

The council’s heritage and conservation department would ensure “no architectural elements of this building are compromised”, it said.