Q&A: What does ethnic recognition mean for Irish Travellers? 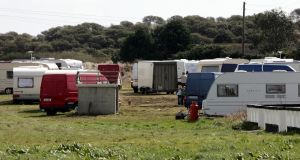 A file photograph of members of the Traveller Community at Brittas Bay in Co Wicklow. Photograph: Eric Luke/The Irish Times.

On Wednesday evening Taoiseach Enda Kenny will make a statement recognising the Irish Travelling community as an ethnic minority for the first time.

The status has long been sought by members of the community but what exactly does this step by the Government mean for Irish travellers?

What does ethnicity mean?

Defined as belonging to a social group that has a common national or cultural tradition, ethnicity is not the same as nationality or place of birth. Your ethnicity or cultural background means the group you descended from. An ethnic group is made up by people who share certain characteristics such as culture, language, religion and traditions.

According to Pavee Point, which campaigns for traveller rights, the recognition of Traveller ethnicity is an acknowledgement that Travellers experience racism and discrimination.

Last month, the Joint Committee on Justice and Equality said that “travellers are, de facto, a separate ethnic group. This is not a gift to be bestowed upon them, but a fact the State ought to formally acknowledge, preferably by way of a statement by the Taoiseach to Dáil Éireann”.

Who are the Irish Traveller community?

Research carried out in 2010 research found there were 36,224 Travellers in the Republic and 3,905 in Northern Ireland. Some 2,700 Travellers did not have access to running water, according to the All Ireland Traveller Health Study carried out in the same year and the Traveller suicide rate is six times the national average for men and women.

A study carried out by the Royal College of Surgeons and the University of Edinburgh revealed last month that that Irish Travellers emerged as a distinct ethnic group long before the Great Famine. The study found that while Travellers originally descended from the general Irish population, they are now very distinct from it.

The research suggests that Traveller origins may in fact date as far back as 420 years to 1597, while the author of the study said travellers are today more genetically different from the settled Irish as are the Spanish.

What challenges do Irish Travellers face?

An ESRI report published last month highlighted the “extreme disadvantage” suffered by Travellers across a range of indicators, including health, housing, education, employment and mortality.

Recognition of Traveller ethnicity “could be of considerable benefit in ensuring respect for the cultural identity of Travellers in the context of targeted services,” it said.

Almost 70 per cent of travellers live in caravans or overcrowded housing, just 1 per cent have a college degree, 82 per cent are unemployed and their health worsens more dramatically than non-Travellers as they age.

Why has the Government decided to recognise Travellers as an ethnic minority?

Recognition has been called for repeatedly by a range of international human rights organisations including the European Commission, which in July last year threatened legal proceedings against Ireland for its treatment of Travellers.

Other organisations putting pressure on Government included the Irish Human Rights and Equality Commission, the Ombudsman for Children, and several United Nations committees – most recently by the Committee on the Elimination of Discrimination Against Women, earlier this month.

The Irish Council for Civil Liberties (ICCL) said on Wednesday that it viewed the State’s failure to recognise Travellers as an ethnic group indigenous to the island of Ireland as contrary to international human rights law and that its stance had fuelled the “mistrust, marginalisation and overt discrimination which has been the hallmark of relations between the majority ‘settled’ population and the Traveller community”.

What was the opposition before this?

Martin Collins, co-director of Pavee Point, said the group had encountered various objections to recognition of Travellers as an ethnic minority from “individuals and political parties” over the past three decades.

“We have managed to convince them that this is the right and proper thing to do but over the years there were some weak and spurious objections,” said Mr Collins. “The biggest objection I heard was that recognition would actually further isolate and marginalise the Traveller Community. But recognising ethnicity is the opposite. It’s about inclusion and respect. Any objections were more to do with ideology.”

The former Joint Oireachtas Justice Committee did issue a report during the last Dáil recommending that the State recognise Travellers as a distinct ethnic minority. However, the Fine Gael-Labour government did not act on its recommendations.

Do any other groups have a similar ethnic recognition by the State?

The Travelling Community will be the sole group to have their ethnicity recognised domestically.

How will this recognition affect the Travelling community?

The move will be a symbolic step forward for the 30,000-strong Traveller community. Campaigners believe it will be hugely important to improving self-esteem and increasing confidence within the community to address its many challenges. The announcement will be welcomed by campaigners who have sought recognition for over 25 years.

The ICCL has said the recognition of Traveller ethnicity will mark a turning point in how Travellers are treated in Irish society and a final “moving away from Government policies over the past 50 years which viewed Travellers as the object of assimilationist policies”.

The next step will be the publication of the National Strategy on Travellers and Roma People. It will set out a range of actions across certain areas, including education, employment and accommodation. Ethnicity is a key part of that strategy.