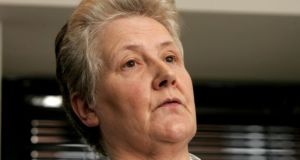 Marie Collins has been with the commission for ‘three difficult years’.File photograph: Matt Kavanagh

Abuse survivor Marie Collins has resigned from the Vatican’s Commission for the Protection of Minors due to frustration with some officials in the Roman curia. Her resignation takes effect from today.

She had been with the commission for over three years. “Three difficult years. But I’ve kept the hope that we would be able to bring change because the other members of the commission are very sincere. They’re very good people, as is (commission chair) Cardinal Seán O’Malley. And Pope Francis has supported all our recommendations.”

But she has found “the attitude of a small number in the Vatican’s curia is resistant to the work of the commission and has not been co-operative.”

Her decision to resign followed an accumulation of frustrations at the hands of such officials. It came to a head recently over “one small issue that for me was the last straw. It was in the context of healing for survivors and victims.”

The commission recommended to Pope Francis that all Vatican departments acknowledge letters from survivors and victims of abuse.

“It seemed like a simple request but I learned afterwards that this particular dicastery (Vatican department) was not going to change their processes, was not going to put in place a system whereby they would respond to such letters. For me that’s just the end of the line.”

It was not its practice to respond to such correspondence, it said.

This was also “the dicastery that would receive the most correspondence from victims and survivors; the dicastery victims write to about cases if they’ve been abused by a priest,” she said.

She did not wish to identify the Vatican department involved but The Irish Times has learned it refers to the Congregation for the Doctrine of the Faith (CDF), which seems at the root of frustrations felt by the commission generally.

“I said when I joined the commission three years ago that if there was anything happening inside and I learned anything that was counter to what was being said publicly by the church, I wouldn’t remain.”

The issue was important to her. “It may not seem important to many. But the fact that we have pronouncements all the time about care for victims and care for survivors and how the church wants to help with healing and that’s their first priority, I think that not being able to simply respond to a victim or survivor’s letter is totally counter to that. So I felt it was time for me to go.”

Other commission work frustrated by officials included the accountability tribunal announced in June 2015 to deal with negligent bishop and church leaders who had not protected children, she said.

Although Pope Francis himself recommended it, legal difficulties were soon found by officials and it was discarded. “I was particularly disappointed with that because accountability was always my number one reason for joining the commission,” Ms Collins said.

Last June, Pope Francis tried again with his apostolic letter A Loving Mother which addressed the same issue. “The Pope didn’t just leave it lie, which was a good thing. He came in with an alternative. It was supposed to come into operation last September but it’s very difficult to get any information as whether it is actually up and running or not.”

Now, she is worried “that it may go the same way as the original accountability tribunal.”

It has been “just shocking to me that in 2017 I can still come across these defensive, inflexible attitudes in men of the church, the same attitudes I saw 20 years ago when I was trying to bring my own case to justice here in Dublin. That’s what’s really the most shocking,” she said.

Archbishop Diarmuid Martin paid tribute to the work carried out by Ms Collins, saying few people in Ireland had made such a consistent contribution to the change in the Church’s response to child sexual abuse.

“Despite opposition and resistance, she remained committed and constructive in what were for her good moments and bad moments,” he said in a statement. “I have learned above all to see in her a person of integrity who is not afraid to chart her own course: where things were wrong she identified them and named them; when she felt uncomfortable she was never tempted to take the easy path and remain quiet and I am certain that will be her position in the future.”

He said child abuse victims and survivors “owe her an enormous debt, but she was never one to seek praise or affirmation for herself”.