Ringing around the world: Bells to protest anti-immigrant views 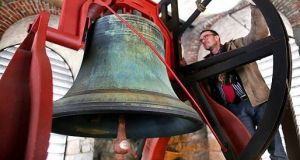 Church and cathedral bells are due to be rung on March 19th at 11am in locations around the world in protest at anti-immigrant sentiment. File photograph: Getty Images

Church bells will ring out in protest at anti-immigrant sentiment across the world on Sunday, March 19th next, following an initiative by Church of Ireland Dean of Waterford Maria Jansson.

At 11am that day, former president of Ireland Mary McAleese will launch the Joy of Bells initiative in opposition to what Dean Jansson has described as “the incredible fear out there” being generated towards immigrants and refugees.

Since it was announced earlier in February, Dean Jansson and Ms McAleese have been inundated with support from around Ireland and the world with promises that bells will ring that morning in locations including on the banks of the Mekong river in southeast Asia, at Notre Dame University in Indiana, US, in Rome, Cambridge in England, in Ballaghaderreen, Co Roscommon, and in churches and cathedrals all over Ireland.

Dean Jansson has described the response as “humbling. Goodness is popping up everywhere.”

Ms McAleese had “been wonderful and has worked really hard on this, although oversubscribed already”, she said.

The response was “testament to the innate goodness of people” said the Dean, “even if populism was a response to hatred, good people are now popping up everywhere and not just in major ecclesiastical centres. Goodness reinforces goodness.”

Among those who have responded positively to the initiative are former Archbishop of Canterbury Rowan Williams, based at Magdalen College, Cambridge; Cardinal Joseph Tobin of Newark, New Jersey, US; the Irish College and the Caravita Oratory in Rome; Ireland’s Catholic primate Archbishop Eamon Martin; the Catholic primate of England and Wales Cardinal Vincent Nichols; St Agnes Catholic Church, Halifax, Nova Scotia, Canada; St Cornelius Church in Pai Si Tong on the banks of the Mekong in Thailand; the Poor Clare Monastery, Ennis, Co Clare; and the City of Sanctuary UK and Ireland.

Also included are cathedrals and churches all over Ireland and of all denominations.

Among cathedrals ringing their bells that Sunday morning will be St Colman’s in Cobh Co Cork. “Cobh is significant because it is from there so many Irish left and became immigrants abroad,” said Dean Jansson.

A Redemptorist priest in Thailand sent her a message to “please let Mrs McAleese know that the bells in St Cornelius Church in Pai Si Tong will ring out on March 19th”.

It was probably “the most unusual church to join the bell-ringing venture. On the banks of the Mekong, in an area where people are still being trafficked,” the Dean said.

The bells at St Cornelius’s will ring to coincide with the 11am ringing at Waterford Cathedral.

“But it doesn’t have to be bells. Mrs McAleese said it might be an idea for people to gather in flash mobs and ring their phones,” said Dean Jansson, “and it doesn’t matter what race or religion people belong to.

“This is for everybody. It’s a tiny little gesture which may help people overcome a sense of isolation as so much hatred spreads across the world. People will be getting together for a good.”