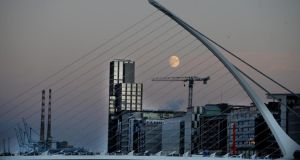 The market price of apartments in the docklands was currently at a level that made it ‘very difficult’ for existing residents to afford to buy in the area. Photograph: Aidan Crawley/ The Irish Times

Concerns that “little or no social housing” will be provided in Dublin’s docklands have emerged in a report from the body set up to monitor the fast-track planning district.

Just 26 homes have been provided for social housing in the Docklands Strategic Development Zone (SDZ), 10 per cent of the minimum number of social homes designated for the area.

It emerged this week that the State’s tallest apartment block, the 190-apartment Capital Dock development recently completed by Kennedy Wilson on Sir John Rogerson’s Quay, will include no social housing.

The SDZ was set up four years ago to govern the development of 66 hectares of land on the north and south sides of the Liffey, following the decision to abolish the Dublin Docklands Development Authority (DDDA).

A 2012 report by the Comptroller & Auditor General had found serious shortcomings in the conduct of the DDDA’s planning and development functions, particularly in relation to the purchase of the Irish Glass Bottle site in Ringsend.

A decision was made to transfer the docklands planning powers to Dublin City Council and in 2014 An Bord Pleanála approved the council’s plans for the construction of about 2,600 new homes and up to 350,000sq m of commercial space in a new development zone. Once a developer is granted permission to build in the zone, that permission cannot be appealed to the planning board.

The Dublin Docklands Oversight and Consultative Forum was established under the dissolution Act to oversee the development of the district.

In its final housing report for 2018, the forum noted that just 26 social homes had been provided out of 1,178 apartments granted permission to date in the development zone area. Under planning laws, developers must provide 10 per cent of an apartment scheme for social housing.

While not all of the schemes granted permission have been completed, the oversight forum said it was “concerned that little or no social housing units will be delivered within the SDZ complexes”.

It was an objective of the zone that social housing would be “successfully integrated within schemes throughout the SDZ” the report said, but “serious concerns” had emerged that social units might not be delivered in the area, largely due to the high market value of docklands apartments.

“Allowing units to be provided outside the SDZ area would undermine many of the aspirations of the SDZ re inclusion, social cohesion and maintenance of public services,” it said.

The market price of apartments in the docklands was currently at a level that made it “very difficult” for existing residents to afford to buy in the area. This highlighted the need for social as well as affordable housing to be built in, or as close as possible to, the zone.

“Social units provided under the SDZ must be located in the SDZ area, or at the very least within the Docklands functional area,” the report found.

There should be an immediate review of available Docklands area sites close to the boundary of the SDZ lands that could be used for housing to facilitate “off-site delivery where no other option is possible”, it said.

“Available Government-owned land [including any remaining Nama sites] should be ringfenced for social housing in the area as the first option for developing these sites. Furthermore, agreements with developers on how social housing will be delivered should be signed prior to granting planning permission.”

Forum member Labour councillor Dermot Lacey said no agreements had been reached to provide social housing in any apartment scheme currently under construction in the docklands.

“This is not news to Minister Eoghan Murphy, this is an issue the forum has tried to raise with him for some considerable time.”

The forum’s report will be submitted to Mr Murphy.