Tuam survivor: ‘I didn’t know who I was’ 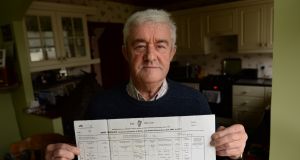 Ann O’Flaherty remembers the first night she met her husband, Michael, at the Irish Club on Parnell Square in Dublin in October 1973 and the walk home afterwards.

“We were walking up O’Connell Street, he was walking me home,” Ann says, sitting in the couple’s home in Kilnamanagh.

“I had only known him two hours, and he stopped on O’Connell Street and he said ‘Right before we go any further, I have nobody belonging to me, I don’t know who I am so if you don’t want anything to do with me,’ he says, ‘we’ll call it quits now’.”

Michael was born in the Tuam mother and baby home on February 15th, 1948. He left the home just before his fifth birthday but remembers nothing from his time there.

“I don’t remember anything about Tuam, nothing whatsoever. I just remember getting into a car and as the car was moving along, the hedges on the road were going backwards,” Michael says.

Michael spent the next 10 years in a foster home in east Galway mostly working on the family’s farm and unsure who his parents were. He remembers a friend from school asking “Who’s your real mother?”

“I couldn’t answer him,” he says. On turning 15, Michael’s social worker brought him to stay at another farm, where he was paid £1 a week to work.

“I never ate at the same table, I never slept under the same roof. They made a shed outside,” he says.

When he turned 24, Michael travelled to Renmore Barracks, deciding “there has to be a better life than this”. However, the issue of who his parents were arose again, when the recruitment sergeant asked his surname and who was his mother.

“I didn’t know who I was,” he says. “Everyone had just called me Miko.”

Within a matter of weeks the sergeant came back with a birth certificate, containing his full name, date of birth and mother’s name.

“It was the best thing I ever done, joining the army. You met all your brothers there. I never had a childhood. My childhood had been taken away from me.

“It brought me out of my shell. If the army hadn’t come out canvassing in 1971, I wouldn’t be here today.”

In 1973, Michael travelled to Dublin to complete an army catering course and it was there he met his wife, Ann. Two years later the couple were married and Michael was stationed at Collins Barracks.

With the help of his wife, Michael began to trace his roots and discovered he had spent his first five years in the Tuam mother and baby home. He tracked down his mother, Patricia, in 1998 who was living in Manchester but was ill in hospital.

They wrote letters and the following year Michael and Ann travelled to the UK to meet Patricia.

“She was a little treasure,” Michael says.

“I just walked in and hugged her and said I was delighted to see her. I was able to call her mam. She was kissing and hugging me and everything. She wouldn’t let me go and she was shivering. She said looking out the window ‘oh Michael I let myself down, I let my parents down, all my friends’.

“My mother said the day after I was born the nun told her ‘your child is gone’. But I wasn’t gone, she could have fed me, changed me.

“She stayed in the mother and baby home for a year and when the year was up she came home, and her mam and dad were delighted but the priest had her out of the parish within seven days.

“She wasn’t an hour home when the priest arrived. My mother told me this – the priest said she’d brought shame on the family, shame on the parish and to get her out of here.”

Michael’s mother died in October 1999 but with no mention to his biological father. “She never said and I never asked,” he says.

Relatives of his late mother let slip the surname of a former boyfriend of Michael’s mother. They believe this man is Michael’s father.

Following the work of local historian Catherine Corless, who gathered death certificates for 796 infants linked to the Tuam institution, a Commission of Investigation into mother and baby homes found in March 2017 that “significant” quantities of human remains had been found buried under the Tuam site.

“I was shocked,” Michael says. “It took me back a bit. Then you look at your own kids, how could people do that? It’s unreal.”

Last month Michael and other members of the Tuam Home Survivors Network called on the Government to begin collecting their DNA to eliminate any delay in returning human remains to relatives for dignified burials.

The Government’s special rapporteur on child protection Geoffrey Shannon is to now examine whether legislation permits the collection of DNA samples from survivors.

Ann, who is the treasurer of the survivors’ network says: “We know Michael’s father married so there is other half brothers and sisters on that side.”

“It’s important they get it [the DNA testing] done,” Michael adds. “We all have different stories, I have mine, I found out who I was . . . the Government needs to get the DNA and correspond it with whatever comes out of the site.”