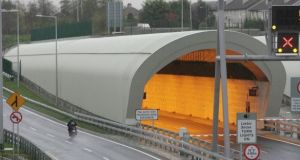 The development was proposed for Oscar Traynor Road in Santry, just east of the entrance to the Dublin Port Tunnel. File photograph: Alan Betson

Plans to build more than 850 homes on one of the largest sites owned by Dublin City Council have collapsed following the refusal of councillors to approve a deal with developer Glenveagh Homes.

Councillors voted 48 to 14 against the plan to sell the site at Oscar Traynor Road in Santry, just east of the entrance to the Dublin Port Tunnel, despite warnings from the council’s head of housing Brendan Kenny that the project would “have to be abandoned” if they did so.

Most Fine Gael councillors, and a small number of councillors of other parties including at least one from Fianna Fáil, had voted in favour of the plan.

Councillors agreed a Labour motion that the site should be developed directly by the council for public housing.

The deal would have seen 853 homes built on the site, 428 of which would have been sold privately by Glenveagh. A total of 253 would be bought by the council for social housing and 172 would be sold to low and middle income workers qualifying for the upcoming affordable purchase scheme.

In 2017, after two years of negotiations with council officials and the Department of Housing, 53 of the 63 city councillors approved plans to sell lands at O’Devaney Gardens, St Michael’s Estate and Oscar Traynor Road for the development of housing. Under the agreement, 50 per cent of the homes would be private, 30 per cent social and 20 per cent affordable housing.

St Michael’s Estate in Inchicore has been designated for the city’s first cost rental project for low- and middle-income workers. Last year councillors ratified a deal with developer Bartra for more than 800 homes on the site of O’Devaney Gardens close to the Phoenix Park in Dublin 7.

However, a substantial number of councillors opposed the O’Devaney deal, with considerable disquiet over the large number of private homes proposed. The deal was approved after Bartra offered to sell a percentage of the homes to the council for a cost rental scheme.

Mr Kenny on Monday night told councillors Glenveagh had indicated a willingness to sell “50 per cent or more” of the private homes on the Oscar Traynor site to the council for a cost rental scheme.

The 853 homes were “badly needed” Mr Kenny said, particularly the social homes, with the area having the highest social housing waiting list in the State.

The opportunity for affordable housing “would also be lost”.

“A huge amount of effort, time and finance has been put into bringing this major project to the stage it’s at now,” he said. “I think it would be highly disappointing and frustrating if this very important project at this advanced stage could be killed off tonight, which seems to be the case.”

It could be up to eight years before the opportunity to develop the site would arise again, Mr Kenny said, adding the council’s credibility with developers would be “severely dented.”