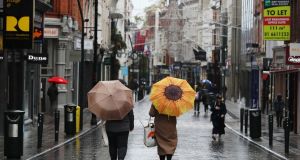 Owners of vacant buildings in Dublin will receive a refund of 30 per cent on their rates next year. Photograph: Brian Lawless/PA Wire

Dublin businesses will see no increase in their rates bills next year following Dublin city councillors’ decision to retain commercial rates at 2020 levels.

Councillors on Thursday night approved a €1.079 billion budget to run the city next year, €213 million of which will be spent on homeless services.

Council chief executive Owen Keegan had advised councillors not to increase rates “in order to support businesses in 2021, in what will undoubtedly be a difficult year.”

It was, he said “most important that Dublin returns to work at the earliest possible time to bring our economy back on track, with all the economic, financial, social and health benefits that the working environment brings.”

Almost 90 per cent of city businesses were entitled to a rates waiver this year, due to the effects of the coronavirus pandemic, with the Government paying the council on their behalf.

However, those rate payers only account for 43 per cent of the money taken in, with 57 per cent paid by the 11 per cent of businesses who fall outside the waiver scheme.

In addition owners of vacant buildings will receive a refund of 30 per cent on their rates next year “in order not to be seen to penalise vacant properties owners in these exceptional circumstances” Mr Keegan said.

Total losses and costs to the council’s revenues directly due to the ongoing pandemic are expected to exceed €33 million next year.

By the end of this year the pandemic will have hit the council’s coffers to the tune of just under €42 million.

The council is not expecting a rapid turn around in its fortunes in 2021, with costs associated with managing the pandemic in the city projected to top €11 million and the loss of income, largely due to the reduction in business activity in the city, both office and retail, to reach almost €22 million.

Mr Keegan said the pandemic was “having a disproportionate impact on the economy of Dublin,” and particularly the city centre because of its reliance on retail, tourism, hospitality and transport .

“Dublin faces a very difficult year ahead given the likelihood that Covid restrictions will remain in operation well into 2021.”