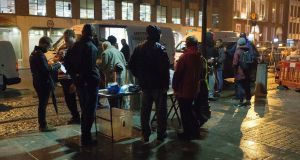 The cost of providing homeless services in Dublin is expected to reach €213 million next year, an increase of more than €150 million since the crisis hit six years ago.

Dublin City Council is raising its budget for emergency accommodation and other services for homeless people by more than €22 million next year. Spending on homeless services is the largest single element of the council’s €1.079 billion budget for 2021, which will be presented to councillors this week.

The council’s 2015 budget for homelessness represented a substantial boost in funding after several years of cuts to the service, with an increase from €45.8 million to €59.2 million. The additional money was designed to address a sudden rise in homeless numbers, and an emerging trend of families presenting as homeless.

However, this proved insufficient, and by the end of 2015 more than €70 million had been spent, largely providing rooms in hostels and hotels.

In an attempt to resolve the problem, the council upped its budget for the following year to more than €91 million, but again this was not enough and the eventual spend for 2016 topped €103 million.

The 2017 budget was €119 million – representing almost 15 per cent of the entire budget for running the city. Again this proved inadequate, and by the end of the year €134 million had been spent. Funding for homeless services for 2018 was set at €142 million, and €150 million in 2019, but the largest increase was for this year, with a budget of €190 million.

However, the council projects that, due to additional costs, partially linked to the coronavirus pandemic, including the need to provide full-day services, the final tally for 2020 will top €200 million for the first time.

Total losses and costs to the council’s revenues directly due to the pandemic are expected to exceed €33 million next year.

By the end of this year the pandemic will have hit the council’s coffers to the tune of just under €42 million. The council is not expecting a rapid turnaround in its fortunes in 2021, with costs associated with managing the pandemic in the city projected to exceed €11 million and the loss of income – largely due to a the reduction in business activity in the city, both office and retail – to reach almost €22 million.

The largest losses are expected to be in parking meter collections, which are projected to drop by more than €12 million. Tolls from the East Link bridge are expected to be down €1.9 million, leisure centre charges down almost €1.6 million, clamping charges €1 million and planning application fees down €500,000.

Council chief executive Owen Keegan said the pandemic was “having a disproportionate impact on the economy of Dublin”, particularly the city centre.