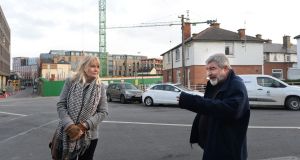 Ongoing “chopping and changing” to planning regulations was “very frustrating” for local authorities and developers, the assistant chief executive of Dublin City Council has warned.

Brendan Kenny, responding to news that co-living developments would no longer be permitted, said: “Planners, local authorities and developers need certainty. We need to be able to plan long term, and this upsets the apple cart.”

Asked if co-living developments that had planning permission but were not yet under construction would be affected, he said he was not certain but added it would be “very difficult” to take permission back that had been granted.

In the Liberties, three planned developments involving more than 700 “shared living” units will be “disastrous” for the area, according to historian and activist James Madigan. Like many living in the locality, he would like to see plans for three co-living developments shelved.

He shows a half-acre site, at Fumbally Lane, within a five-minute walk of Newmarket Square, where international co-living company The Collective plans 69 shared accommodation dwellings. Around the corner, on Cork Street, 397 units are planned by Stoneweg, a Geneva-based investment firm. Down the street, on the site of the long-closed Paddy Whelan bike and electricals shop, another 375 “studio suites” are proposed.

“It’s not just the co-living developments. It’s the student accommodation, the hotels, the luxury apartments,” said Madigan. “The community is not being engaged with on these plans, not until it’s too late. What we need is housing, parks, facilities and an area plan that protects the historical integrity of the area.

“International investment funds buying up the land aren’t interested in any of that. Their only interest is profit. And what happens is, when they make their profits the value of the land goes up so much that housing for ordinary people isn’t worth building.”

The streetscapes of this most historic part of Dublin have undergone rapid change.

Almost 3,500 student beds have either been built, are under construction or are proposed, in 11 different developments in this small part of Dublin 8. Add to these a plethora of new hotels and, says Madigan, “anyone new coming to the Liberties is just passing through while young people growing up here can’t stay because there’s no housing being built”.

Local People Before Profit councillor Tina MacVeigh said that although permissions already granted cannot be revoked, Minister for Housing Darragh O’Brien must set higher standards for those that will be built. “Ventilation, safe gathering spaces, private recreational space such as balconies, less sharing of kitchens – these are all key issues as well as the size of the actual bedroom units.”

“The Minister could immediately issue higher standards for those developers that have applied but have not yet been granted planning permission.”

Mr Kenny said his main concern was to get “building happening on these vacant sites”. He agreed land values in parts of the city meant standard housing was not profitable or “viable” in them.

Dublin 8’s student accommodation, which follows a similar model to co-living units, with up to eight small bedroom units around one shared kitchen and living area, is currently for rent for €250-€300 a week.

Architect and housing policy analyst Mel Reynolds calculated the profit per square metre for such schemes could be up to eight times that of standard housing.

The question, whether co-living is permitted or not, remains how to make it attractive to developers to build the housing people want in these areas. And if they won’t, to what extent will the State step in to provide it, asks Reynolds.