Critical role of homecare: ‘I don’t want to go into a home’ 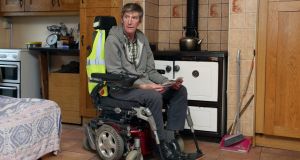 Vincent Deeley: ‘I do get depressed sometimes . . . but what can you do?’ Photograph: Joe O’Shaughnessy/The Irish Times

Vincent Deeley (60) worked in forestry until the late 1990s when he was diagnosed with a wasting disease called Becker muscular dystrophy.

He lives in a rural area near Loughrea, Co Galway, and says about 90 per cent of his day is spent at home in his wheelchair, feeling removed from the community and isolated.

His wife works about 15 hours a week and Deeley says lack of services, such as home care hours and personal assistance, means there are times when his wife is at work and he home alone, unable to make himself a cup of tea or keep the fire going.

Deeley, whose condition is degenerative, previously had seven hours of homecare per week, which was cut to six about three years ago. He also receives about 40 “social hours” per year, which he uses mainly to go swimming.

“I fall very often because I use the wheelchair to pull myself up . . . I have to call the neighbour and ask them to come in and help me,” he says. “The longer I live, the more help I need but instead my hours were cut. It means more time stuck in the house. You can hop up on the bus in Dublin there with the wheelchair but I live between Loughrea and Ballinasloe so I can’t really go anywhere unless I go in a car.”

Ireland formally ratified the UN Convention on the Rights of People with Disabilities in March of last year. Article 19 of the convention states that people with disabilities have the right to live in the community and to have access to a range of supports to facilitate this.

However, campaign groups, politicians and charities say that sometimes these services are not in place.

Independent TDs Tommy Broughan and Thomas Pringle recently advanced a motion for debate in the Dáil calling on the Government to legislate for the right to personal assistance (PA) services.

“Personal assistance is an assistant that can help them get out and about. Currently, there isn’t really any service in place,” says Pringle. “Without PA, people with disabilities can be stuck in the house all day. If it’s in place, then they can contribute to society.”

Dr John Roche, chairman of Muscular Dystrophy Ireland (MDI), says empowering people with the condition to live independently is their main priority and PA services are necessary to achieve that.

The Disability Federation of Ireland (DFI) says the lack of community services, such as homecare hours, social hours and PA services for people with disabilities “makes a mockery of our aspirations to treat people with dignity”.

“In DFI we know that there is a huge unmet need for community services of all sorts. We know that a lack of funds is the common reason given to those left at home without proper support,” says Joanne McCarthy, head of policy at DFI.

“Most people on PA support get less than five hours per week. This condemns people with disabilities to several things. For example, being trapped in their own homes, unable to get out and be part of their communities.”

Deeley says that unless he receives additional hours, he fears he will have to be put in a nursing home

A spokesman for the Department of Health said the HSE provides a range of assisted living services including PA and home support services to “support individuals to maximise their capacity to live full and independent lives”.

He added that while the “resources for the provision of assisted living services available are substantial, they are finite”.

Deeley says that unless he receives additional hours, he fears he will have to be put in a nursing home. “ I don’t want to go into a home. I want to stay here.”