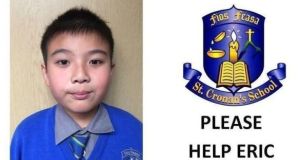 Co Wicklow schoolboy Eric Zhi Ying Xue has been granted leave to remain in Ireland , according to his school

Maeve Tierney of St Cronan’s School, Bray had been behind a petition to help save the boy from deportation. Eric, although born in Ireland, is not a citizen and had been facing deportation even though he has never lived abroad.

“I’m getting in contact with fantastic news. Eric is safe from deportation and his future in Ireland is assured. What an amazing Christmas present for him! Thank you so much for helping to change a small boy’s life,” Ms Tierney wrote under the heading “We Won” on an online Change.org petition page set up to request that Minister for Justice Charlie Flanagan revoke the deportation order. The boy was nine and in fourth class when the campaign was set up in 2018.

A message on the school’s Facebook page thanked “all the supporters of our petition and the Minister for Justice for granting both Eric and his mother leave to remain and live a normal life, safe in Ireland”

According to his principal, the boy’s mother arrived here illegally in 2006 and became pregnant in May 2009. She had exhausted all legal avenues to prevent deportation, which prompted the school to launch an online petition.

The online petition stated: “Eric was born in Ireland but is not an Irish citizen and has never been out of the country.

“If he is forced to go to China, where his mother was born, he will have no access to China’s health or education systems because he is not a Chinese citizen. This is a humanitarian issue – Eric urgently needs your support.”

In a referendum in 2004, 79 per cent of the public voted against an automatic entitlement to citizenship for those born on the island.