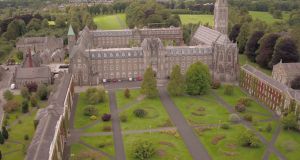 A new language of racism, “mostly opportunistic, understated, but no less toxic, has emerged in our public and political discourse” in Ireland, the president of St Patrick’s College Maynooth has said.

Fr Michael Mullaney said this language was “stoking hostility towards the ‘other’ and testing our own sense of hospitality for the first time”.

Speaking at the College’s 50th Christmas Carol Service, he said “most of us would balk at the idea that we are racist because we understand racism on an individual rather than structural level”.

However, he pointed out, “a recent EU report highlighted worrying patterns of racist behaviour in Ireland. Surprisingly, figures of harassment, discrimination and racism were significantly higher in Ireland than in many other European countries”.

Fr Mullaney recalled how “in the city of Philadelphia, there is a poignant and imposing monument to the Irish famine. It is an Irish famine ship: on one side, life-size figures of emaciated and despairing emigrants embark leaving home; on the other side, smiling and hope-filled faces disembark. A fresh start in a new world.”

Recently in Ireland “there has been a heightened awareness of the arrival to our country of migrants, refugees and asylum seekers, knocking on our door in search of protection, security and a better future,” he said.

He said people had been “horrified by the harrowing stories of migrants found hiding and, more shockingly, dead in truck containers - modern coffin ships”.

Meanwhile “we are wrestling with the complex issues around housing and integrating migrants in asylum centres. More worrying is the emerging fear of ‘the other’, the foreigner, the stranger,” he said.

To some extent, he said, “the fear is legitimate because the preparation for this encounter is lacking. Some parish communities’ traditional tranquillity seem to be threatened.

“The problem is not that we have doubts and fears, but when they condition our way of thinking and acting to the point of making us intolerant, closed and perhaps - without realising it - even racist.”

At this time of year “through the prism of Advent, we can see the stories of many strangers, refugees, asylum seekers, hidden in the story of a child whose expectant parents travelled far from home in search of hospitality in an unwelcome place,” he said.

Preparing for Christmas was “more than a safe, private, familial enterprise, but embraces the great public issues of our time, including the value and dignity of every human person. It impels us to choose openness over fear; hospitality over hostility. To see that the stranger or the foreigner is not a threat but a treasure who can become a source of new grace for our communities,” he said.