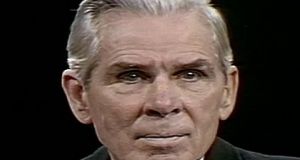 Pope Francis in July approved the miracle needed for the archbishop’s beatification.

The planned beatification of the late Irish-American archbishop Fulton Sheen has been postponed amid concerns about his handling of clerical child-sexual abuse allegations.

He was a hugely popular evangelist on US radio and TV winning two Emmy awards for Most Outstanding Television Personality and featuring on the cover of Time magazine. He died in 1979 aged 84.

The highly unusual decision to postpone his beatification was at the request of members of the US Conference of Catholic Bishops.

Just over a month ago Pope Francis approved the beatification, which was to take place on Saturday at the Cathedral of St Mary in Peoria, Illinois, where Archbishop Sheen was ordained in 1919.

It is believed the postponement followed a request by Bishop Salvatore Matano of Rochester, New York where Archbishop Sheen had been bishop from 1966 to 1969.

Bishop Matano was concerned that Archbishop Sheen could be cited in the report from an ongoing state attorney general’s investigation into New York’s bishops and dioceses and their handling of cleical child-sex abuse allegations.

He contacted the papal nuncio inWashington after the beatification date was set to express concerns that Archbishop Sheen could be accused of insufficiently handling allegations of abuse during his tenure in Rochester.

New York’s attorney general began an investigation last September into whether any of the state’s eight Catholic dioceses had covered up acts or allegations of clerical child-sexual abuse.

What was the miracle?

Pope Francis in July approved the miracle needed for the archbishop’s beatification. It involved the unexplained recovery of an Illinois boy, who was apparently stillborn in 2010.

Archbishop Sheen’s maternal grandparents, John and Mary Fulton, came from Croghan near Boyle in Co Roscommon. They emigrated to the US in the mid 1850s and settled in Illinois.

Archbishop Sheen visited Ireland many times, the last in April 1952 when he re-dedicated the Church of St Michael at Croghan in Roscommon. He was then an Auxiliary Bishop of New York.