Conor Wilmot ‘found something on the internet that went wrong’ 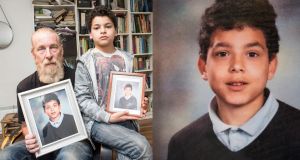 Greg Wilmot and his son Ross at their home in Sixmilebridge; and Conor Wilmot, who was laid to rest on Tuesday

A priest has sounded a warning over the death of a Clare teenager, whom he said “found something on the internet that went wrong”.

At the funeral mass of Conor Wilmot, Fr Harry Bohan, the parish priest of Sixmilebridge, told mourners that Greg Wilmot had found his son’s body behind the family’s home in Sixmilebridge last Thursday.

Mr Wilmot has said the 13-year-old died because of a “choking game” he had found on the internet and did not intend to take his own life.

“Greg has no doubt that Conor died as a result of a horrible misadventure,” Fr Bohan said. “Conor found something on the internet that went wrong.”

Fr Bohan said: “That must come as a warning to all of us to be careful as to how we manage exploring worlds we have limited control over.”

Fr Bohan said his family would describe him as “a beautiful soul and to know and love him was a great privilege and they had that privilege for a certain length of time”.

Fr Bohan said that the local community “is in shock” over the death “and struggling to understand this tragic loss of a bright and beloved young life”.

He said: “No one knew Conor better than his own family and they would describe Conor, as other people would, as a bright, intelligent, talented human being.”

At the end of the mass, Greg Wilmot received a standing ovation after performing a song entitled Fly On that he wrote in tribute to his son since his death last week. The two shared a love of music and had booked tickets to attend a music festival together in Paris next month.

Earlier, a number of symbols of Conor’s life were offered up including the St Patrick’s school rugby jersey, a woodwork creation of the family crest he had completed at school, a Dr Who book and a figure of wrestling hero CM Punk.

In the church, the white coffin had a St Senan’s jersey draped on top along with a rugby ball.

The priest told the mourners that for Conor’s family and friends, his “loss leaves a void in their lives that can’t be filled and it is only lessened with time and memories even at that. We as a community want to support the family in any way we can.”

Fr Bohan said: “We say to his family who now endure the incomprehensible loss of a son and brother, nephew and friend, our hearts are with you in compassion and unwavering support, not just today, but in the days and weeks ahead.

“In our shock and sadness, we are a community of people in need of much compassion, support and understanding for the journey ahead.”

Conor is survived by his parents, Greg and Irina, his sister, Melanie, and his brother, Ross. Conor was later laid to rest at Ballysheen cemetery.