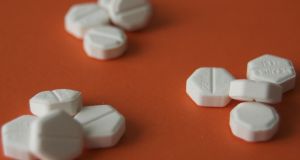 The abortion pills, mifepristone and misoprostol, were sent to 1,636 women on the island of Ireland between January 2010 and December 31st, 2012.

Abortion pills bought online can be a safe “alternative” to travelling for abortion or unsafe abortion, research published in the British Medical Journal finds.

The study, based on self-reported outcome data from 1,000 women in the Republic and Northern Ireland, finds 95 per cent of those who obtained abortion pills online successfully terminated their pregnancies.

Abortion pills are effective in terminating a pregnancy up to 10 weeks’ gestation.

Researchers at the University of Texas in Austin, with Rebecca Gomperts, founder of international collective Women on Web (WoW), analysed data provided by women who had bought medical abortion pills through the WoW website between January 2010 and December 31st, 2012.

The abortion pills, mifepristone and misoprostol, were sent to 1,636 women on the island of Ireland during the two years.

Ninety-three reported experiencing symptoms for which they were advised to seek medical attention, of whom 87 did seek attention. Of the five who did not report, none reported any adverse outcome.

The purchase and importation of abortion medication is illegal in both the Republic and Northern Ireland. Under the Protection of Life During Pregnancy Act 2013, anyone found to have taken such medication could face prosecution and a fine or up to 14 years in prison.

There have been no known prosecutions under the Act, and the Health Products Regulatory Authority has said it would not prosecute a woman who had illegally imported abortion medication for personal use.

Though the number of pills being seized by Customs, in the post, has fallen, it is understood abortion pills are being made available through alternative means.

In the North, the PSNI is actively raiding abortion activists’ homes and offices searching for abortion pills, and a number of women have been prosecuted for taking the pills or procuring them for other women.

“Reported rates of adverse events are low. Women are able to self-identify the symptoms of potentially serious complications and most report seeking medical attention when advised. Results have important implications for women worldwide living in areas where access to abortion is restricted.”

1 Covid-19: Cases increasingly occurring among young people, officials say
2 Mother and five children sleeping in car while seeking accommodation
3 Depp may have severed own finger, according to email to doctor, court told
4 Donald Trump is an amateur populist – the real trouble is yet to come
5 Ex-Fianna Fáil TD apologises to Mary Lou McDonald over ‘damaging’ tweet
Real news has value SUBSCRIBE