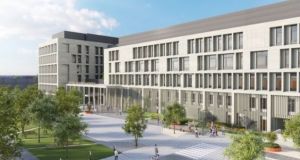 National Maternity Hospital at the St Vincent’s University Hospital campus, shown in the graphic above

The Sisters of Charity has urged there be no delay with the new hospital project at Elm Park in Dublin. They pointed out that expected Vatican approval of their sale of the site “is imminent” but that regardless, it will have “no impact whatsoever” on healthcare provided at the new hospital.

On Sunday, Minister for Health Simon Harris said all outstanding issues about the planned new National Maternity Hospital at the St Vincent’s Hospital site had to be resolved before substantial building work begins there.

On Saturday, former master of the maternity hospital Peter Boylan said the St Vincent’s hospital site was still under religious control. He told RTÉ’s Marian Finucane Show: “The archbishop has been quoted in the Irish Catholic (newspaper) as saying the Sisters (of Charity) have to get permission from the Vatican to alienate the land – that is to transfer ownership of the land and the buildings into a secular structure.”

Dr Boylan said the entire project should be “paused” until agreement had been reached with the Vatican to “alienate” the lands at St Vincent’s.

The board of St Vincent’s and the Sisters of Charity, which owns the land, needed to produce “credible documentary evidence” they had sought and achieved permission from the Vatican to transfer the assets to a new “vehicle”, he said.

He added that if the building of the hospital was completed before the Vatican handed over the land, it could prevent procedures such as IVF, abortions and the prescription of contraception being carried out there.

A spokeswoman for Mr Harris said: “The Minister has been very clear that in advance of the substantive building works commencing, all outstanding issues need to be resolved. He understands work is under way in this regard.”

The spokeswoman added that Mr Harris would only bring the issue back to Government “when this work is completed”.

In a statement Monday afternoon the Sisters of Charity said: “We are confident that the smooth legal transfer of our shares in St Vincent’s Healthcare Group (SVHG) from the Religious Sisters of Charity is imminent as we come to the end of a lengthy legal process involving all parties.

“In line with canon law, we are required to seek formal approval of our decision from the Archbishop of Dublin and the Vatican. The Archbishop has approved and recommended our decision to the Vatican for formal sign off. We are confident of a positive outcome shortly.”

This process, they said, “has not and should not delay the new hospital project in any way. Most importantly, it has no impact whatsoever on the healthcare provision and patient care provided by St Vincent’s Hospital.”

This pending legal transfer “brings to an end over 180 years of service by our Sisters in providing healthcare at St Vincent’s Hospital. We send our best wishes to the board, management and staff at St Vincent’s Healthcare Group and also to the National Maternity Hospital in its new location,” they said.

They said they would “continue in our work in helping the poor, vulnerable and marginalised at home and abroad in harmony with the legacy and mission of our foundress Mary Aikenhead”.