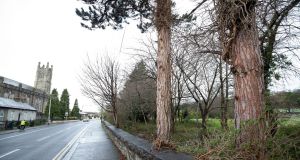 The site of Springvale allotments opposite the Church of the Nativity where Dublin City Council aims to ‘rapid build’ 71 social housing apartments. Photograph: Tom Honan

Chapelizod residents are to seek an injunction to stop Dublin City Council building a complex of six social housing apartment blocks in the village without planning permission.

The council plans to start work next month on 71 “rapid build” social housing apartments beside the Phoenix Park in Chapelizod, on the site of Springvale allotments opposite the 19th century Church of the Nativity.

The council did not use the normal planning process for the development and is instead using emergency powers, introduced by the Government to deal with the homeless crisis, to build without planning permission.

These powers can be implemented if the council chief executive determines there is a need to deal urgently with “an emergency situation calling for immediate action”.

Modular housing estates, originally for homeless families, were built in Ballymun, Finglas, Drimnagh and Darndale, using this emergency provision. This meant no planning application was made by the council and no one could lodge objections, make submissions or appeal the development.

The council is now using the same legislation to build social housing complexes at Bonham Street and Cork Street in Dublin 8, Bunratty Road in Coolock, Dublin 17, as well as in Chapelizod.

Chapelizod Residents’ Association chairman, John Martin, said he objected to the use of emergency provisions to build general social housing in this instance.

“It doesn’t matter what I or anyone else says about this development – I can say I love it or I hate it, it’s immaterial. Local democracy is dead in this situation because we have no planning process to avail of, as we would have with any other development.”

The council had held information meetings on the plans, but these were “pointless”, Mr Martin said.

“The only option we have now to object to or appeal this development is to seek a judicial review of the council’s decision to use this emergency legislation. They have pushed us into this corner.”

The residents’ association intends to meet other local representative groups, including the Chapelizod Old Village Association, the Chapelizod Heritage Society and the Tidy Towns committee, to discuss legal options.

“The only way we can see to go forward is to seek an interlocutory injunction to stop the council starting this ahead of any judicial review,” Mr Martin said. “The council needs to be tested on whether they can use emergency legislation to provide what is just social housing.”

Mr Martin said the association was not opposed to social housing. “We are not running from our social responsibilities, but we think there should be a mix of social and affordable housing. There should be up to 30 per cent social, as the council has planned for its other sites in the city.”

The council said the use of prefabrication along with the emergency planning provisions would allow it to halve the build time, and the Chapelizod complex could be completed by 2020.

1 Man found guilty of murdering girlfriend during drinking session
2 The real Contagion virus is out there and it’s causing virologists to worry
3 Majority of Irish Covid-19 cases come from variant that originated in Spain – study
4 Cork shootings: Father and sons to be buried in two separate funerals
5 First full moon on Halloween night since 1955 will be rare ‘blue moon’
Real news has value SUBSCRIBE