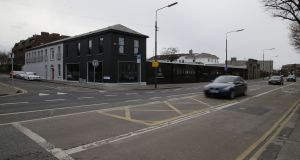 Plans for an eight-storey apartment block on Merrion Road in Dublin 4 have been opposed by the National Transport Authority (NTA) amid concerns over the impact on the BusConnects project and the Sandycove to Sutton cycle route.

Local residents have also objected to the complex on the former Gowan Motors car showroom site, opposite Our Lady Queen of Peace Church and beside St Vincent’s hospital, which they said was “too aggressive” for the architectural conservation area.

Dublin City Council has now said the proposal was “not considered to be acceptable” in light of its height and scale, and effect on future public transport projects, and has given the developers six months to revise the scheme.

The Gowan Motors site, south of Donnybrook and Ballsbridge, was sold last year for an estimated €18 million. A recently formed development company, 1 Merrion Land Limited, headed by Anthony Noonan, last December sought permission from the council to demolish the car showrooms and build a complex of 66 apartment in eight storeys. McGill Planning, acting for the developers, said the scheme was “high density” but, in light of the Government’s removal of height caps last year, the proposed height was “in line with government guidance and emerging trends for sustainable residential development”.

In a submission to the council, the NTA said it had advised the developer, before the application was lodged, that part of the Gowan Motors site was likely to be needed for road widening as part of the Blackrock Core Bus Corridor and for the East Coast Trail, part of the Sutton to Sandycove route.

Earlier plans to close the Merrion Gates level crossing to traffic and build a flyover between Strand Road and Merrion Road, as part of the cycle route, were shelved last year.

The NTA said the changes that it had advised the applicant were required to move the apartment scheme back from the roadway, “have not been undertaken” and told the council the proposal was premature.

The Merrion Road Residents and Environmental Association told the council the development was “too aggressive for the subject site and the setting of neighbouring properties”.

It said it was not opposed to development on the site but the proposal would “totally overwhelm neighbouring dwellings” and “block natural light” and would affect property values.

“At eight storeys high this development would tower over all adjoining properties which are generally two storey and in some cases single-storey properties.”

Future Analytics, planning consultants representing residents of of Fortlands Apartments, a four-storey scheme behind the site, said the proposal would lead to “darkening the public realm” and was overbearing in scale.

“The proposed design may be suited to Sandyford Business district but fails to make a positive contribution to the Merrion Road corridor in this area.”

The council said it had “significant concerns regarding the impact of the proposed development on the future road layout for the area” in light of the NTA’s requirements.

The design of the apartments was “more akin to a commercial development and is not considered to sensitively integrate with the red-brick character of the area,” it said.

“The proposed bulk, massing and height of the development would not successfully integrate into or enhance the character of the area and is not considered to be acceptable,” it said.

The developers have six months to submit new plans to the council.