Proposal for garden ‘log cabins’ rejected due to safety fears 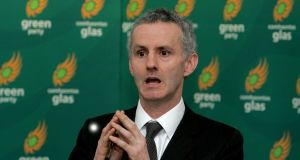 Ciarán Cuffe: “I don’t think we should be relaxing building regulations to facilitate homes which may not be up to standard”

Proposals to permit ‘log cabins’ in the back gardens of family homes in Dublin to ease the housing crisis have been rejected amid fire safety and substandard accommodation concerns.

Independent city councillor John Lyons proposed a change to the city development plan so that families could provide accommodation for relatives who are facing high rents and homelessness.

A current provision in the development plan to allow for so-called granny flats stipulates that “ancillary family accommodation” must have direct access to the rest of the house and must “not be a separate detached unit”.

Mr Lyons wanted this section changed to allow a “free-standing structure to the rear or side of the main family dwelling”. He said the proposal was “not a panacea to the housing crisis, but it is a practical measure”.

However, the assistant council chief executive and head of planning Richard Shakespeare said “life safety issues” had to be put ahead of all other considerations.

“There is now growing demand to facilitate the development of free-standing independent structures, sometimes referred to as log cabins, on landlocked sites, ie to the rear of the main family dwelling, which do not comply with current development plan policy and fail to meet development plan standards.”

There were, he said, “genuine concerns” that relaxing policies and standards to allow log cabins in inaccessible gardens would result in “the provision of small substandard dwellings”.

He said by far the greatest concern was the lack of “a safe and independent means of access from the public road”, with the only access coming through the main house.

“This could have safety implications for future residents in the event of fire”, and could also present dangers for the residents of the main house.

Labour councillor Alison Gilliland said while she appreciated the motivation for Mr Lyons’ proposal, there was “a danger we will create a sub-culture of shanty towns”.

Green Party councillor Ciarán Cuffe said there was a “slippery slope” when it came to changing building standards. “I don’t think we should be relaxing building regulations to facilitate homes which may not be up to standard.”

He added that the biggest concern was how fire services would access a log cabin, and how the residents would get out. “I think the most significant issue relates to fire safety.”

Sinn Féin councillor Daithi Doolan said the proposal was a “Band-Aid approach” to the housing crisis.

Mr Shakespeare said the council planners could consider applications for free-standing log cabins on a case by case basis, but not in “landlocked” back gardens and only if the new homes had separate, adequate, direct access to public roads.