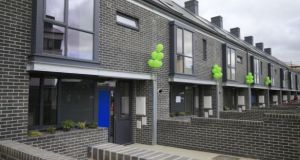 Dublin City Council is seeking developers to build more than 370 affordable homes for low- and middle-income workers to buy at sites in Ballymun and Ballyfermot.

The council has selected three sites for its first affordable housing projects in more than a decade, even though it has yet to be issued with regulations from the Department of Housing to govern the scheme.

The Government in January of last year announced plans to use public land to provide homes to buy at a discount. Minister for Housing Eoghan Murphy last June signed the scheme into law, but local authorities have yet to be issued with regulations to allow them to run affordable purchase schemes in their areas.

The homes will be aimed at workers who cannot secure mortgages to buy on the open market, but do not qualify for social housing. Single applicants must earn less than €50,000, while the limit for a couple will be €75,000. Once the homes are built, they will be sold to qualifying buyers at a discount of up to 40 per cent on market rates.

The council announced plans last December to develop up to 2,000 affordable purchase homes on sites across the city. It is now seeking expressions of interest to build on the first of these sites, in anticipation of the regulations being issued shortly by the department.

The largest of the three sites, a 6 hectare (14.8 acres) plot off the Ballyfermot Road, immediately south of Cherry Orchard Hospital, could accommodate 215 homes: 64 apartments and 151 houses.

The two sites in Ballymun are both just over 2 hectares (4.9 acres). A site at Silloge Road, also known as Sillogue Road, is close to the main street in Ballymun and is earmarked for 83 homes, 65 of which would be houses, along with nine apartments and nine duplexes. Close by, a site at Balbutcher Lane would allow for 74 homes, again mostly houses, but including eight apartments and eight duplexes.

While the cost of the homes will not be determined until after the regulations have been issued by the department, it is expected that most would be available for under €250,000.

Infrastructure, such as roads and sewage works to service the sites is being provided through the State’s “serviced sites fund”, with the Cherry Orchard lands benefitting from €7.6 million in funding and about €4 million each going to the Ballymun sites, this funding is expected to be reflected in lower house prices once the homes are ready for sale.

Two other Ballymun sites are already being developed for affordable housing by housing co-operative Ó Cualann Cohousing Alliance. However, these are independently run schemes which are not reliant on the Government regulation.