Eight one bedroom houses, part funded by water charges refunds, were opened in Fingal by the Peter McVerry Trust. Those with complex support problems will be housed in the estate. 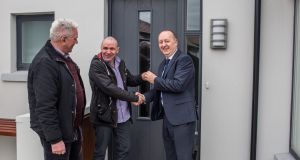 The first housing estate built by the Peter McVerry Trust for homeless people, which has been part funded through water-charge refund donations, has been completed in north Co Dublin.

The scheme of eight one-bed houses will provide permanent homes for single adults with complex health and care needs on a site at Ravenswood in Fingal, to the west of Dublin Airport.

While the trust has previously refurbished older buildings for homeless accommodation, this is its first purpose-built estate, and was completed in less than a year, on a green-field site beside an existing homeless hostel run by the trust.

Most of the €1.6 million in funding for the project came from the Department of Housing, but two of the houses were built using €250,000 from the water charges refund project.

In 2017 the trust, along with the Simon Community and Focus Ireland appealed to the public to donate refunds of money paid to Irish Water, after water charges were scrapped, to help combat homelessness. The trust has so far received more than €350,00 through the project.

“This is Peter McVerry Trust’s first new-build social housing scheme and is a landmark achievement for us,” trust chief executive Pat Doyle said. “I’d like to thank Fingal County Council and the Department of Housing for enabling us to deliver this scheme, and also to the public who helped increase the number of units delivered through donations received by the Refund Project.”

The housing has been developed using the Housing First model, where homeless people are given secure accommodation, with any health or addiction issues addressed after they have been housed.

The tenants will have access to both visiting and on-site supports from trust staff on a 24-hour basis, while a community building will provide residents with a central location in which to socialise.

“Part of our ethos is to try and provide accommodation for the most vulnerable and the most problematic homeless people, the ones with the most complex needs. They would be people who have never had their own home before,” Fr McVerry said.

Liam Coughlan, who will be moving into one of the houses shortly, said he had been moving from place to place and sometimes sleeping on the streets for many years.

“I’ll be 41 in March. I’ve been roaming the Dublin streets for years and wondering where I was going to end up...it’s hard to tell for how long.”

Having a place of his own was “overwhelming”, he said.

“Some of the places I’ve been, the doors would be hanging off, but here you have your own front door and your own back door, and it’s spacious, you can breath in and breath out.”