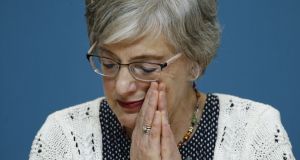 Katherine Zappone: she has instructed Scouting Ireland to comply with a full review by Tusla into concerns identified

The State child and family agency Tusla is to conduct a full review into how Scouting Ireland supervises children and handles disclosures of abuse after an initial inquiry raised serious concerns about current practices.

After an initial assessment of the youth organisation’s policies, Tusla officials found several shortcomings and “live cases” where poor practice had “left children exposed to risk of harm”.

In a letter on February 18th to Scouting Ireland chief executive Dr John Lawlor, Tusla made a series of urgent recommendations over existing safeguarding failings.

These included an “immediate review” of how children were supervised, and a recommendation that Scouting Ireland “consider the viability of continuing with overnight trips”.

Officials found several recent instances where children had been subjected to sexual assaults and indecent exposure by other juvenile members.

“In one case on a Cub camp, a child exposed himself and sexually assaulted children in the tent,” the letter from Tusla stated.

On another camping trip “a child was acting out a forceful sex act on other children in the tent, who were afraid to sleep for fear of being assaulted themselves”.

Minister for Children Katherine Zappone on Wednesday instructed Scouting Ireland to comply with a full review by Tusla into concerns identified.

Speaking in the Dáil, Ms Zappone said she had “serious worries” over the issues uncovered by the State child protection agency.

Scouting Ireland is in the middle of a major historic child sexual abuse scandal, with over 300 alleged victims of past abuse identified. On foot of the scandal, Tusla staff met Scouting Ireland officials at their head office in Larch Hill, Dublin, last month, and agreed to an assessment of current standards.

Initial inquiries from Tusla found “insufficient” procedures around the reporting of abuse to statutory authorities, and poor practices around how disclosures were handled.

The letter from Tusla to Scouting Ireland, published by Ms Zappone, was critical that safeguarding staff in the youth organisation had directly interviewed children over disclosures of alleged abuse.

Responsibility to investigate child-protection concerns lay with Tusla and An Garda Síochána, and “children should not have been interviewed by anyone other than these agencies”, Tusla officials said.

In a statement, Scouting Ireland defended its current child-protection policies, and questioned the evidence behind some of Tusla’s eight recommendations.

The letter from Tusla raised “serious questions”, and Scouting Ireland has sought “an urgent meeting with the chair and chief executive of Tusla to understand better their concerns”, the organisation said.