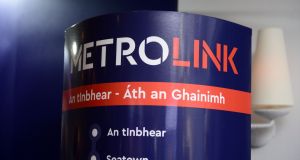 Ballymun Kickhams GAA club relocation is on hold pending the resolution of the route of MetroLink. Photograph: Cyril Byrne

Plans to build a new multimillion-euro base for one of Dublin’s most renowned GAA clubs, Ballymun Kickhams, could be in jeopardy due to uncertainty over the route of the MetroLink rail line.

The club, which has the largest representation on the Dublin senior football panel, has been based outside Ballymun at a facility near Dublin Airport for more than 15 years.

As part of the regeneration of the suburb, Dublin City Council had identified a site to the west of the main road in Ballymun, south of Ikea and the M50, to bring the club into the community.

The planned facility, expected to cost in excess of €3 million, jointly funded by the council and the club, included full-size floodlit grass and all-weather pitches, a clubhouse with changing rooms, equipment rooms, referees’ room and meeting rooms, a gym, physio room and shop, and a sports hall suitable for other sports including basketball and badminton.

The club had been preparing for the move, which would see it sell its current grounds in Collinstown north of the M50 at the back of Dublin Airport. However, it is understood it has been recently told the project is on hold pending the resolution of the route of the metro.

“We have been in discussions with the council about the move for the best part of the seven years,” a senior club member said.

“Where we are now, on the far side of the M50, means kids have a very dangerous trek to reach us, really they can’t get there unless they are brought in a car, and for many parents in Ballymun, that’s just not possible.”

The club had been aware the rail line was likely to run under the Ballymun site, but this was not expected to affect the above-ground development. However it was recently indicated its move was on hold pending a reassessment of the needs of the metro at the site.

“We are in the position now where our all-weather pitch has reached the end of its useful life. We need to redevelop where we are now or move – we can’t afford to hang around.”

Local Fianna Fáil councillor Paul McAuliffe said concern was growing that the National Transport Authority (NTA) now planned to use the site as a construction depot.

“If the NTA wants a significant portion of this site, if would undermine the delivery of pitches for Ballymun Kickhams. The ongoing uncertainty over the metro is having a chilling effect on the development of Ballymun in general.”

A spokeswoman for the council said it had commissioned consultants to carry out a study to ascertain how the club and other facilities could be accommodated on the site “given its proximity to the proposed MetroLink”.

A spokesman for the NTA said it intended to publish revised proposals for MetroLink in the coming weeks. “Those amended plans will be subject to a further round of public consultation.”

The preferred route of the line was published last March. It emerged last month that the metro, which was due to run from Swords to Sandyford, will terminate before it reaches Ranelagh.