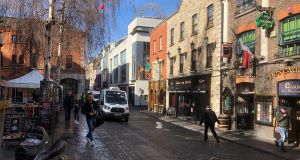 A councillor said the situation in Temple Bar is becomming intolerable with walking tours.

Dublin City Council has written to Fáilte Ireland to express concerns about walking tours that take place in the city which have been described as “intolerable”.

Issues that the council wanted to highlight include the size of the groups taking these tours and the potential for them to block footpaths and affect pedestrian flows.

The council said it has carried out a “desktop study” into walking tours and their possible regulation and decided that it would not be appropriate to regulate them by way of byelaws.

The matter came to light when councillor Mannix Flynn asked what progress had been made in regulating the numbers of people who can partake in free walking tours throughout the city.

Free walking tours are typically conducted by one guide who brings tourists around parts of the site, visiting sites of particular interest. The participants do not have to pay a fee but they are encouraged to tip a certain amount at the end if they enjoyed the tour.

“Gettysburg in the US and the city of Bruges have attempted regulation. The regulations are very basic involving the issue of a licence; limiting the numbers on the walking tours (around 26 max would appear to be the average); stating that tours should not obstruct the footpath or block access; tour guide to wear identification and fines for non-compliance,” the council said.

The management added however that because walking tours are operated nationwide, it would not be appropriate for the council to regulate by way of byelaws. It also pointed out that a right exists under the Irish Constitution to assemble or meet peacefully and without weapons.

The council added that it has written to Fáilte Ireland “requesting that its concerns in relation to walking tours be taken into account in the next review of the guidelines, and has made specific representations requesting that a maximum of 26 participants be allowed take part in each tour and also that assembly points and operations be carried out in a manner which does not affect pedestrian flows.”