Call for Oireachtas group to consider ‘reparations’ for Travellers 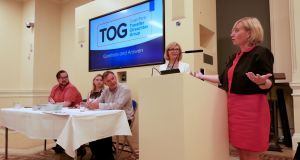 Members of the Traveller community called for reparations, a State apology and the banning of the word “knacker” at an event in Dublin on Tuesday.

The calls were made at the announcement of a new cross-party Oireachtas group aimed at improving life for the community.

Convened by Independent Senator Colette Kelleher and Labour TD Jan O’Sullivan, the group has an initial membership of 11 Oireachtas members. The come from four parties – Sinn Féin, Solidarity-People Before Profit, Fianna Fáil and Labour – and the Independent ranks.

The group will focus on core issues for the community, education, employment and mental health, and says it will pursue these through the Dáil, Seanad and in committees.

“We’ll meet on a monthly basis, and we will report back, give an account of ourselves and the progress we’re making,” said Ms Kelleher. “There are specific proposals on education, employment and mental health, and there are wider issues then on reparations and a truth commission.

“We’ll be taking opportunities as we find them, in legislation, committees, reports and also within our own parties. It will be a hard-working group. I think quarterly feedback sessions with the Traveller community will keep us focussed. Annual reports would be a good idea.”

A number of speakers from the floor said it was “time to talk about reparations” to the community, and the establishment of a “truth and reconciliation commission”.

Martin Collins, co-director of Pavee Point, agreed and said the community had been systematically “humiliated, degraded and abused” for decades, while Thomas McCann of the Traveller Counselling Service said State policy had been to “erode and erase Traveller culture”.

Lecturer Sindy Joyce agreed with a call for the banning of the word “knacker”, calling it “hate-speech” that should be included in “hate-crime legislation”.

The event heard presentations from Traveller activists, including Mr McCann who outlined the levels of discrimination and racism experienced by Travellers and the impact on participation in education, employment and access to housing.

“Mental health was not an issue before the 1963 Report of the Commission on Itinerancy,” said Mr McCann.

That Government report, which set the tone for State policy until the mid-1990s, described Travellers – then known as itinerants – as a “problem” to which “solutions” were needed. It gave consideration to separating Traveller children from their families. It is seen as starting decades of State-sponsored policies which sought to assimilate Travellers, end nomadic Traveller culture. Mr McCann called for a national Traveller mental health strategy.

Ms Joyce described the negative experience Travellers have had in the education system, while Oein de Bhairdiún of Clondalkin Travellers outlined the dearth of pathways for Travellers into employment and careers, such as the gardaí, medicine, teaching and in the media.

They called for a national employment strategy for Travellers, cultural awareness training for teachers, and the mandatory inclusion of Traveller history and culture in the school curriculum.”