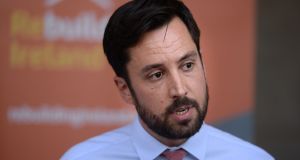 Minister for Housing Eoghan Murphy has accepted that he will struggle to convince homeless families to accept a privately rented house backed by the State’s Housing Assistance Payment (HAP).

Speaking after a “housing summit” with local authority housing managers in Dublin on Tuesday, the Minister said some parents with children in emergency accommodation had a “negative view” of HAP.

Two recent reports, from the Dublin Region Homeless Executive (DRHE) and the interdepartmental group on housing, found homeless families were increasingly reluctant to accept such tenancies.

Families feared losing their place on the social housing waiting list and preferred to wait for social housing, while they also believed that tenancies from private landlords were inherently insecure.

Insisting that families could later apply for a council house on a social transfer list, Mr Murphy said HAP tenancies were better than family hubs or hotels and succeeded for the “vast, vast majority”.

“There is a transfer list for people who take HAP in the private rented sector, to allow them eventually transfer into a permanent social housing home,” he said.

Questioned about the reluctance of many families to accept HAP tenancies, Mr Murphy said he understood that some people have had negative experiences of private rental accommodation.

“But evidence tells us for the vast majority of families and individuals HAP does work and is working. We need to convince those families that we can make it work for them as well.

“If they are given the option of staying in emergency accommodation over going into the private rented sector with HAP support that they choose that second option . . . from there we can get them into a permanent social house.”