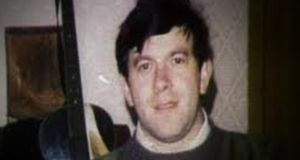 Declan Flynn, whose killers left him bleeding so severely that he died of asphyxia, essentially choking on his own blood.

Declan Flynn loved music, particularly Elvis Presley. The former Aer Rianta worker had a special bond with his Down syndrome brother Greg and loved bringing him to the pictures. He enjoyed picnics with his large family in Wicklow.

That is how Flynn’s family like to remember their late 31-year-old brother and uncle, not as someone who was kicked and beaten to death with sticks in Fairview Park in Dublin in 1982.

In the past week, the second eldest of nine children born to Christopher and May Flynn, raised on the Swords Road in Whitehall, was remembered by relatives as a kind, gentle man who loved his family and who “came into his own at Christmas, decorating the family home from top to toe and giving everybody gifts”.

His memory was also recalled formally by Taoiseach Leo Varadkar in an address to the Dáil when he spoke recently about the historical injustices suffered by Flynn and other gay men. Varadkar apologised on the 25th anniversary of the decriminalisation of homosexuality to gay men who were prosecuted under the State’s former laws.

Flynn was killed in the early hours of September 10th, 1982, murdered by a gang of five so-called “queer-bashing” teenagers that included a 14-year-old boy. The youths had carried out a series of homophobic beatings in the park during the summer of 1982. The suspended sentences for his attackers triggered a long march towards equality in Irish society.

“This was the first time we could lay it out, not just the horrific nature of the crime and the abhorrent sentences but who Declan was,” Flynn’s nephew Niall Behan said this week, days after his uncle was commemorated at a reception hosted by the Taoiseach at Dublin Castle last weekend.

“You only ever read about the last part of his life, but we wanted people to know about the life he had. It brings it back to the reality that this was a person and counteracts what the judge said, that lack of value he placed on Declan. We wanted to bring back his life, that he was a person, full of life and laughter.”

Mr Justice Seán Gannon, the presiding judge in the case, sentenced the youths to between one and five years on guilty pleas to manslaughter in March 1983. The sentences were suspended. The judge said: “It’s important the public should know it could never have been murder, although it was an appalling thing for Declan Flynn and his family.”

The judge had heard evidence, in the form of statements from two of the accused youths, that the gang were was acting as a kind of self-professed vigilante group. They had wanted “to clear our park of what we call queers” and they had been “queer-bashing for about six weeks before and had battered 20 steamers”.

The youths, who included two members of the Air Corps, robbed Flynn of IR£4 from his pocket and his watch, and “Apparently your decision was made with some degree of haste, and there is doubt about your assessment of the situation,” the judge told them.

“Unfortunately, it has transpired from the evidence that this was not an isolated incident, but hopefully it will be the last. Everybody is entitled to have feelings and opinions but it should never reach the stage of expressing violence to others.”

He allowed the five walk free from the Central Criminal Court, saying that there was “no element of correction required” as they had “come from good homes and have experienced care and affection”.

“While I must demonstrate the abhorrence of the community by imposing sentences, I don’t think it necessary to be served immediately by detention,” said Gannon, who died in 2011.

The ruling caused public outrage and led to one of the earliest and largest demonstrations in support of gay rights on the streets of Dublin. Tensions ran high in the Dáil too in the days after the sentencing, with the judiciary accused of “incomprehensible” and “bewildering” inconsistencies in sentencing.

Mary Harney, then a Fianna Fáil TD, challenged the minister for justice at the time, Fine Gael’s Michael Noonan, to seek the judge’s resignation. She reminded the Dáil of its agonising over the right to life of the unborn in debates leading up to the 1983 abortion referendum, when people who had taken away life were now roaming around free.

The outcome horrified the Flynn family. “I had expected that justice would be done and be seen to be done,” said Declan’s father, Christopher Flynn. The family described the judge’s decision as “an insult”.

“They walked out of court free but my son cannot walk out of Glasnevin, ” Christopher said.

Behan said his grandfather rallied around the family, trying to support them, but his grandmother was “absolutely devastated”. He heard stories of her crying endlessly in the house over Declan’s death.

“I can never be in a situation where you are a parent and your child is taken away from you. This was Declan going out with his friends one night and not coming back,” he said.

Gay rights campaigner David Norris, who would go on to become an Independent Senator, said at the time that the sentences could be “interpreted as a licence to kill”.

Norris knew Flynn personally and recently recalled that his fear of being seen by work colleagues led him to avoid established gay venues in favour of meeting spots that were potentially dangerous.

The targeted nature of the attack made the crime all the more horrific, and the lenient sentences all the more shocking. It emerged in court that the 14-year-old who attacked Flynn was told by one of the others: “Hide behind a tree. We are going to bash a queer.” Then, one of the group sat alone on a bench, awaiting a target. When he was approached by Flynn, he and the others, who had been hiding in nearby bushes, attacked. Flynn ran and almost made it out of the park but was tripped up and beaten near the exit.

Leo Varadkar, noting that he was just a child when Declan Flynn was murdered, told the Dáil that the 31-year-old’s only “crime” was that he was gay, setting the context for his killing against the backdrop of an unjust law

Flynn was killed 12 years before Behan was born. As he grew up, Behan pieced together what happened to his uncle, first from asking questions about the names of the siblings on the stairs in family photographs and wondering where his uncle was now. Later, as he got older, he asked more questions and was told what happened to Flynn.

He knows now why there were Elvis impersonators at birthday parties for his late uncle Greg. “That lit him up,” said Behan, “and that came from Declan”. He knows why Flynn’s handwriting is hard to read; he was beaten in school for being left-handed and was forced to use his right hand. He had a stammer, it had an effect on his confidence and he was bullied.

Behan says he has seen his mother clench physically passing Fairview Park and understands why she was so traumatised when he was beaten up last year by a group of youths trying to steal his phone.

“It is still very raw,” he said of his family’s pain, 36 years after the killing.

Behan’s mother and uncle were the relatives who in 1982 went to James Connolly Memorial Hospital in Blanchardstown to identify the body of someone she initially believed, wrongly, was not her missing brother.

“This won’t be something that will ever go away,” he said.

Behan, who has just stepped down as president of Dublin City University’s student union, said last weekend in his speech at Dublin Castle that his uncle’s death had “contributed to a greater understanding and respect for diversity in modern Irish society”.

Varadkar, noting that he was just a child when Flynn was murdered, told the Dáil that the 31-year-old’s only “crime” was that he was gay, setting the context for his killing against the backdrop of an unjust law.

“When the Oireachtas makes something a crime, people believe that they have a licence to punish those whom they believe are committing it,” Varadkar said.

“These were young men who grew up in a society that feared and hated homosexuality. They took the law into their own hands, and all too often, people allowed the law to do its bashing for them.”

Behan describes the country’s first gay Taoiseach recognising the injustice suffered by Flynn and his family as a “bittersweet” moment. He wonders whether Declan would be living in a more inclusive society had he not been murdered, given how his death acted as a catalyst to push a movement forward. The apology to gay men over their past treatment was “fitting” and “speaks of a changed Ireland, ” he said.

But there is still a “void” in his family over the lenient sentences given to his uncle’s killers. He welcomes the Government’s plans to amend legislation to expunge the criminal convictions of gay men prosecuted before homosexuality was criminalised in 1993.

“Declan wasn’t the only person at that time who was let down. For the men who are still alive, hopefully it is some sort of solace for them to be told that they didn’t do anything wrong,” he said.

“It was the laws that were clearly archaic and dehumanising. They clearly don’t speak for the country we live in now.”