About 20,000 tickets left to see Pope Francis in Phoenix Park 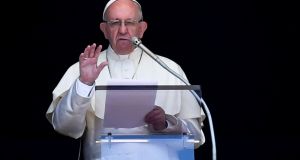 Pope Francis delivers his speech to the crowd from the window of the apostolic palace overlooking St Peter’s Square on Sunday. Photograph: Andreas Solaro/AFP/Getty Images

There are just 20,000 tickets left for the Mass that Pope Francis will celebrate in Dublin’s Phoenix Park next month.

All tickets for other events in Ireland he will take part in on August 25th and 26th are gone.

So too are all tickets for the World Meeting of Families pastoral congress at the RDS on August 22nd, 23rd, and 24th next.

Brenda Drumm, media and communications manager for World Meeting of Families 2018, said request for tickets for all the events “has been overwhelming by any standards”.

They are available at www.worldmeeting2018.ie/en/Tickets/Closing-Mass-ticket-only

Ms Drumm said she was aware of “the disappointment that many people feel” at not being able to get any of the 45,000 tickets allocated for the visit of Pope Francis to Knock Shrine on Sunday, August 26th but that there were no plans currently to make more tickets available there.

Decisions on the number of tickets available at the various venues were made based on advice that prioritised the safety, security, and comfort of people in attendance, she said. Roscommon TD Eugene Murphy (FF) has called for a further 5,000 tickets to be made available at Knock through a different source to online such as postal.

He said he had been contacted by people “who simply could not get through on the online booking system or had no access to broadband to book the tickets that they so desperately wanted to see the pope in Knock.”

Mr Murphy said not everybody was “internet savvy or has access to the internet”.

“There should have been a phone line for bookings and also a postal request system, so that those who wished to could have accessed tickets without having to go through the internet,” he said.

As to the “Nope to the Pope” campaign, which had been block-booking tickets they never planned to use to the Phoenix Park Mass, Ms Drumm said “we are not overly concerned by the relatively small number of false bookings. This was not unexpected with an event of this scale for which tickets were free.”

But she said it was “disappointing that some people would try to undermine the right of ordinary families to go to Mass with the Holy Father, showing little respect for the right to religious freedom.”

“However, World Meeting of Families 2018 is confident that it has robust systems in place to check all bookings and there will be a number of verification requirements before people actually receive a ticket,” she said.

Meanwhile, the Association of Catholic Priests is organising a series of four public regional meetings in Ireland at 7pm on the Wednesdays in July to determine “What do we need to say to Pope Francis about the Irish Church?”.

The meetings are open to everybody and summaries of what will be said at them will be prepared and forwarded to Pope Francis.

One of country’s main labs unable to process Covid-19 tests over weekend due to staff shortages 12:56
Westmeath nursing home says it is managing Covid-19 outbreak 12:59
Golf and tennis clubs closed under Level 5 as deemed ‘non-essential’ services 12:23
Number of schools forced to close after hand sanitiser is recalled 12:12
Relatives not given chance to be with dying Covid nursing home residents - report 12:05