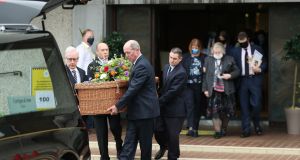 Family members following the remains of Brendan Halligan after his funeral Mass at the Church of Holy Spirit, Ballyroan, Dublin. Photograph Nick Bradshaw for The Irish Times

Brendan Halligan was Irish and European to the core, his funeral was told on Thursday morning. He was “the embodiment in one man of a plurality of identities, overlapping, reinforcing and not contradicting each other,” said former European Parliament president Pat Cox.

Speaking at the end of Mr Halligan’s funeral Mass in the Church of the Holy Spirit, Ballyroan, Co Dublin, Mr Cox said, “But if all of these things stand out as milestones marking the life and times of Brendan Halligan, they all flowed from the anchored stability of the safe haven which was his home and his family.”

Family “was the centre of Brendan’s life from which the energy of his convictions and the force of his personality radiated out across such a wide universe of interests.”

Former Labour Party TD, senator and general secretary, as well as founder/director of the Institute of International and European Affairs , Mr Halligan (84) died at his home in Dublin last Sunday. In over a half century of public service he also led State companies and agencies.

He “used his God-given talents to the full over the course of a long and well-lived life. No more could be asked; no more could be given,” said Mr Cox.

Speaking on behalf of the family, Fergal Halligan, thanked “all the carers who looked after my father during his long illness over the last five years”, as well as named medical and nursing teams involved.

His father “was a remarkable husband, father, friend and mentor to so many people,” he said, concluding, “Thank you Dad. We love you so much.”

The homily, delivered by Mass celebrant Fr Peter O’Connor, was prepared by the Halligan family. His was “a happy life, as he told us himself only recently” with “a unique talent for bringing people together. This is what brought him great success and achievements in his professional life but for us, his family, he was our rock and our linchpin.”

He was also “a true Dub” and “a man of unending patience except when it came to the referees at the Dublin matches. He loved his home city.”

Offertory gifts included a Dublin flag, a Tricolour, an EU flag and his favourite poem The Wayfarer by Pádraig Pearse with its line, as recalled by Fergal, “I have gone upon my way, Sorrowful.” Included also were Légion d’Honneur Mr Halligan was presented with by France, a family photograph and his favourite hat.

At the end his wicker coffin was taken from the church to the strains of the EU anthem, Beethoven’s Ode to Joy.