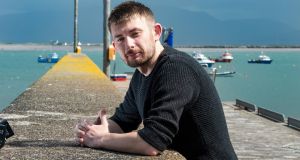 Thomas O’Driscoll: ‘I am grateful I had champions, opportunities and the support of people that made a critical difference.’ Photograph: Domnick Walsh

A Kerry man who was taken into care when he was seven, left school almost illiterate when he was aged 14, became a father at 15 and spent several years homeless, has just graduated with a Master’s Degree in Social Work.

Thomas O’Driscoll (28), from Cahersiveen, describes his graduation from University College Cork last month as “sweet”, paying tribute to the “critical” commitment of one social worker, his mother’s love and the support of youth workers.

His early childhood was marked by violence and abject poverty. “I remember so many nights lying in bed scared, especially when [] used to come home from the pub which was nearly nightly sometimes. [] abused my mother so violently and used to beat us all a lot.

“I was hungry a lot as a young child, went without meals,” he recalls. “Going without even the most basic was constant. One of my siblings used to hide food, normally bread, and at night would come into my room and we would share it.”

The violence, from an adult in the house, was constant, he says.

“I remember one night very late and my mother was screaming. I knew what would happen to me if I came out of my room . . . but I had to and when I did I saw []on top of my mother punching her and ripping her clothes off. My siblings came down and we all tried to stop it but []just hit us all and dragged my mother out the back door. I was four at that time.”

His two sisters were removed to live with other family when he was removed into residential care in Tralee, 65km from the family home, with his brother then eight years old.

“My mother found it difficult to cope with us, but she absolutely loved us. When she had access time with us she paid for a B&B in the town out of her social welfare so she could tuck us into bed. It’s something I have always held on to, how much she did love us.”

He had one “fantastic” social worker, from aged five until he was 18. “I think my social worker truly tried her very best. She was really caring, and I know that was critical. I wouldn’t be where I am now had I not had that.”

At primary school, however, he had undiagnosed dyslexia and was in a resource class much of the time where, he says, he was left to sit behind a shelving unit “just staring at the wall”.

“That set up my negative view of education. By the time I went into secondary school I was trying to deflect attention away from how I was really feeling. I started misbehaving, missing school.

“I never felt anyone in secondary school cared in the slightest about what was going on with me. No one ever gave me the space to talk about why I was acting out. Teachers passed remarks: ‘You’ll do nothing with your life.’ For a long time I believed that.”

The summer after 1st year he got his girlfriend – also 14 – pregnant. The birth of his daughter, he says, was “the start of me thinking I could change things . . . I wanted to be a good dad.

“One of the key things my mother taught me was that she absolutely loved me and always tried her best. I wanted to transfer that to my daughter, to do my best for her.”

He had already left school but got work on a turf-delivery round and as a carpark attendant, while living at his girlfriend’s family home, with her and their daughter.

He attended literacy classes for early school leavers which he “really enjoyed, maybe because there was not the same pressures as in school”. He heard about Youthreach, applied, “and that’s where life started to change”.

Co-ordinator Margaret Culloty “absolutely believed in me” he says. “It was such a nice atmosphere. We’d all have breakfast together in the morning. I had one-to-one contact with a key worker all the way through; there was circle time and from the first day I walked in I always felt listened to and valued as a person. It was the holistic education I really needed.”

He passed his Leaving Cert Applied, progressed to a Post-Leaving Certificate course and there he was encouraged to apply to the Tralee Institute of Technology, from where he graduated in 2014.

He was drawn to social work, but needed support if he was to complete a Masters. Aged 22 he was no longer “in care” but he approached Tusla. “They were my corporate parents. I made a case to them about supporting me to do the Masters. They did. They supported me. Without that I don’t think I could have done it.”

He felt “really proud” on receiving his Masters by post, at home in Castlegregory, Co Kerry, in June.

“It is not something I could have envisaged for my future, when I was that child, feeling worthless, craving attention and feeling the only way I could get it was to behave badly. There is a danger at that age, you can be almost self-fulfilling in your thoughts, if you believe them and everyone around you does too.

“Looking back, for me it confirms that people with care experience, if given the correct support, they can unlock their potential and achieve. It is critical, how the education system, the care system, respond to children like I was.

“I am grateful I had champions, opportunities and the support of people that made a critical difference.”

The schools referenced by Mr O’Driscoll could not be contacted by The Irish Times. Tusla could not comment on an individual case, but extended its congratulations to him.

“Tusla is committed to maintaining support for care leavers to adequately prepare for leaving care and to ensure consistency of support for these young people/young adults in aftercare,” added a spokeswoman.