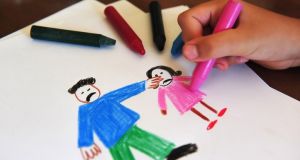 ‘We do anticipate a backlog in welfare referrals as we continue with the recovery phase,’Tuslsa says. Photograph: iStock

During 2019, Tusla managed 56,561 referrals to child protection and welfare services, an increase of 3 per cent on the previous year, and an increase of 30 per cent since its establishment in 2014, according to its annual report.

However, the coronavirus pandemic has significantly reduced the number of referrals the agency has received in the first half of this year.

As restrictions began to lift, the number of referrals increased again to an average of 1,285 per week, which Tusla described as consistent with school closure time.

“The pandemic also had a noticeable impact on our ability to visit children at home and also to facilitate contact for children in care, with both of these substantially returning to normal levels,” a spokeswoman said.

“We do anticipate a backlog in welfare referrals as we continue with the recovery phase.”

A further 24,828 children received a family support service from Tusla in 2019.

The annual report also highlighted a number of challenges facing the agency, including the demand for services as a result of the growing population and the increase in demographic groups requiring additional supports suchs as asylum seekers, homeless, Traveller/Roma and people living with a disability.

“As Ireland becomes increasingly multicultural, the broader mix of nationalities and cultures will likely result in increased service demands for Tusla and a requirement to develop new skills to respond appropriately to the emerging needs of service users,” the report states

Tusla also stated that the delivery of its services within its financial allocation is “challenging” for the agency. Last year, it required an additional €23.6 million and “strict financial governance was required to bring the agency in on budget”.

Following the report’s publication, Tusla chairman Pat Rabbitte said the recruitment and retention of social workers “continued to be an area of concern” for the agency last year.

“Tusla sought to develop new initiatives to attract social work graduates in 2019 and is investing in strategies to improve staff retention. In particular, the conversion of 408 of agency staff to direct employment contracts was a significant achievement in 2019,” he said.

“Overall, Tusla must continue to improve and innovate, be prepared to admit its mistakes and to evolve a culture not hidebound by the past. The Board and the CEO are committed to a major programme of continuous improvement for which we require support from many quarters.”