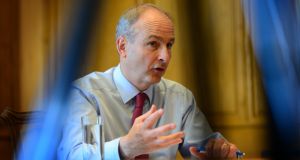 The previous government had stated it was considering a statutory inquiry into the historical abuse scandal last year, following calls from Micheál Martin (now Taoiseach) when he was leader of the Opposition. A spokeswoman for the Department of Taoiseach said launching any independent inquiry “is a very significant matter and one which will require careful consideration.” Photograph: Bryan O Brien / The Irish Times

Scouting Ireland is seeking to hire a new safeguarding manager to oversee child protection standards in the organisation, its third in as many years.

The organisation has been grappling with the fallout from a massive historical child sex abuse scandal, with over 350 alleged survivors of past abuse identified to date, and 275 alleged perpetrators.

Mr Begley took over the key role in April 2019 from child safeguarding expert Ian Elliott, who had been in the position on an interim basis since 2018.

Mr Elliott had overseen major changes in the organisation’s child protection policies, and earlier this year completed a report into the scale of the historical child abuse.

The abuse related to two legacy organisations, the Catholic Boy Scouts of Ireland and the Scout Association of Ireland, which merged to form Scouting Ireland in 2004.

Mr Elliott’s report concluded abuse had been “tolerated” at the highest levels of the former organisations, with the crimes of those who preyed on children covered up to protect the reputation of the scouting movement.

In a recent update to its membership, Scouting Ireland stated it was recruiting a new safeguarding manager to replace Mr Begley, who had held the role for little more than a year. The correspondence to members stated the organisation expected the vacancy to be filled by the start of September.

“In the meantime, Scouting Ireland has been successful in securing interim expert cover pending the new safeguarding manager taking up their position,” the update stated. The job advertisement for the position stated the contract was for an initial three-year period.

The previous government had stated it was considering a statutory inquiry into the historical abuse scandal last year, following calls from Micheál Martin (now Taoiseach) when he was leader of the Opposition.

A spokeswoman for the Department of Taoiseach said launching any independent inquiry “is a very significant matter and one which will require careful consideration.”

Following Mr Elliott’s report into the scandal, the Government was considering “whether a statutory or public inquiry would uncover new information,” the spokeswoman said.

“This is something which will need to be taken into account in contemplating the question of an inquiry,” she said.

Privately senior civil servants have cautioned against any State inquiry for fear it could interfere with ongoing criminal investigations into the historic abuse.