What’s behind the miraculous spiral on Booterstown Strand?

That’s Maths: Something must have altered to trigger this development 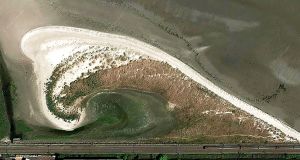 A spiral has appeared over the past decade or so on the beach between Booterstown station and the Merrion Gates, southeast of Dublin. A sandbank (pictured) has gradually built up, driven by the action of the sea waves, and has assumed a form close to a logarithmic spiral.

We all know what a spiral looks like. Or do we? Ask your friends to describe one and they will probably trace out the form of a spiral staircase. But that is actually a helix; a curve in three-dimensional space. A spiral is confined to a plane – it is a flat curve. In general terms, a spiral is formed by a point moving around a fixed centre while its distance increases or decreases as it revolves.

Logarithmic spirals – also known as equiangular spirals – abound in the natural world. In the plant kingdom we have ferns and many other plants that curl up into spirals and suddenly spring open to disperse their seeds. The seeds in a sunflower are arranged in logarithmic spiral arcs.

Many molluscs, notably the nautilus shell, form almost perfect logarithmic spirals. On a larger scale, the spiral arms of hurricanes often adhere to this mathematical model, as do the cold fronts of extra-tropical depressions. And larger still by many orders of magnitude are the vast arms of spiral galaxies.

The logarithmic spiral was first analysed by René Descartes, inventor of co-ordinate geometry. It was also studied by Galileo and by his ace student, Evangelista Torricelli, who found an expression for the length of the spiral arc between any two points on the curve. Jacob Bernoulli was enthralled by the many wonderful properties of the curve and wrote an entire book about it, Spira Mirabilis – The Marvellous Spiral.

The logarithmic spiral remains unaltered under a range of geometric transformations. It can be rotated and scaled and still assume its original form. These properties may account for its ubiquity in nature. Evolution often produces the best possible designs, using the smallest amount of material or the least energy, and finds the mathematical shapes that achieve maximal efficiency.

A particular logarithmic spiral has attracted the attention of artists. This is the so-called golden spiral, which gets wider by a factor of 1.618, the golden number, for every quarter turn. The golden number has been used by artists going back to Leonardo da Vinci and enthusiasts also find it in the design of the Parthenon. It is frequently claimed that a rectangle whose ratio of length to breadth is the golden number has special aesthetic properties; such a claim must be treated with scepticism.

A remarkable spiral has appeared over the past decade or so on the beach between Booterstown railway station and the Merrion Gates, southeast of Dublin. A sandbank has gradually built up, driven by the action of the sea waves, and has assumed a form close to a logarithmic spiral.

Something must have changed to trigger this development; perhaps the outflow of the Elm Park stream, which enters Dublin Bay just north of the sandbank, was altered in some way. It will be interesting to study the development of this evolving physical feature.

Peter Lynch is emeritus professor at UCD school of mathematics & statistics. He blogs at thatsmaths.com

– An evening course on recreational maths at UCD, Sum-enchanted Evenings, is now open for booking online at http://www.ucd.ie/all/study or by phone at (01) 7167123.