That’s Maths: tides are a tug-of-war between Earth, moon and sun 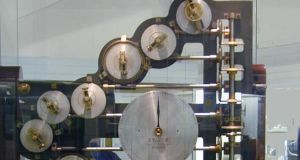 All who set a sail, cast a hook or take a dip have a keen interest in the water level, and the regular ebb and flow of the tides. At most places the tidal variations are semidiurnal, with high and low water twice each day. In the simplest model of ocean tides – the equilibrium theory – the envelope of water surrounding the Earth has two bulges, one towards the moon and one on the opposite side of the Earth. Each point passes under the two bulges, giving high water twice as the Earth rotates once a day. But why are there two oceanic bulges?

The gravitational pull of the moon varies with distance, being weaker at points farther away. At the point on Earth directly under the moon the pull is strongest, causing the water to bulge up. At the opposite point, the pull is weakest, allowing the water to “bulge away” from the moon. This is simplistic, but it is true that the difference between lunar gravitation on opposite sides of the Earth is the actual reason for the tidal influence of the moon.

The link between the tides and the phase of the moon was known for many centuries, but the mechanism for this remained obscure

The sun also exerts a pull on the oceans, weaker than the moon, sometimes reinforcing it and sometimes counteracting it. This is the reason for the variation of tidal range between spring and neap tides over a lunar month. Variations in the lunar and solar distances, and the angle of the Earth’s axis are also important factors.

The link between the tides and the phase of the moon was known for many centuries, but the mechanism for this remained obscure. Was it through heat or moonlight or via the atmosphere or through some strange magnetic force? In 1687 Newton published his Principia, containing the laws of motion and the law of universal gravitation. With these laws, Newton accounted for Kepler’s observed planetary motions and also gave an explanation of the ocean tides.

The equilibrium theory of tides is a reasonable first approximation, but it is quite inadequate to explain many observed characteristics of tidal variations. For example, while a semidiurnal pattern is found in most places, there are locations where there is high water just once per day. Moreover, computations indicate that the combined effects of the lunar and solar forces can raise the water levels by about 45cm, yet the tidal range is often several metres, so there must be other important factors.

After Newton came Laplace – the Newton of France – who replaced the equilibrium theory by a dynamic theory of tides, giving a much more precise description of the tidal motions. Later, Belfast-born William Thomson (Lord Kelvin) developed the science by constructing the harmonic theory of tides. This represents the water level as a sum of distinct sinusoidal or wave-like components, each having a different scale and speed. The harmonic theory allows for the astronomical forces of the moon and sun and also local effects like sea-bed topography and coastal geography.

Kelvin used his theory to determine the amplitudes and periods of the main harmonic components. He then devised a method of predicting tides by constructing a machine – an analogue computer – to calculate the components at future times and add them together to get a graph of the water level up to a year ahead. Thus, accurate tide tables could be produced for a large number of ports throughout the world.

Today there are software packages (and apps) available for analysing tidal records to determine parameters for a given location (harmonic analysis) and use them to make tidal predictions (harmonic synthesis). They use methods similar to those underlying the marvellous tide prediction machines, but many more components are included and the results are computed at lightning speed.

Peter Lynch is emeritus professor at UCD school of mathematics and statistics – He blogs at thatsmaths.com