Probe being launched on Saturday can survive temperatures of up to 1,650 degrees 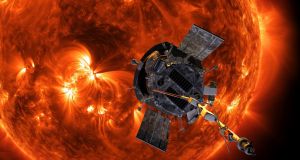 A Nasa image shows an artist’s rendering of the Parker Solar Probe approaching the sun. It’s designed to take solar punishment like never before, and is capable of withstanding temperatures of up to 1,650 degrees. Photograph: Steve Gribben/Johns Hopkins APL/NASA via AP.

Nasa is set to send a spacecraft on a scorching journey towards the sun, with an aim to offer the closest-ever glimpse of the star at the centre of the solar system.

The Parker Solar Probe, named after American solar astrophysicist Eugene Parker, will, as the US space agency describes it, “touch the sun” as it flies within 3.9 million miles of the star’s surface.

The car-sized probe, which will fly closer to the sun than any other man-made object, is set to blast off on Saturday at 3.33am (8.33am Irish time) from Cape Canaveral, Florida.

Its mission is to help scientists unlock the mysteries of the sun’s atmosphere and answer questions like why its corona, the outermost layer of the solar atmosphere, is hotter than its surface.

The probe will travel at more than 690,000km/h, faster than any spacecraft in history, and use Venus’s gravity over the course of seven years to gradually bring its orbit closer to the sun.

The spacecraft is expected to make its closest approach to the sun in 2024, as it flies 3.9 million miles above the solar surface.

The last time a man-made object came close to the star’s surface was in 1976 when Helios 2 achieved perihelion, the point of the orbit at which it was closest to the sun, at 27 million miles.

Over the course of its mission, the Parker Solar Probe will orbit the sun 24 times while being subjected to extreme heat and radiation, with temperatures expected to reach 1,377 degrees, nearly hot enough to melt steel.

On each close approach to the sun, the probe will sample the solar wind, study the sun’s corona, and provide close-up observations.

Scientists hope the mission will be able to provide answers as to why the corona is 300 times hotter than the surface of the sun, a phenomenon that Nasa says is in “defiance of all logic” because “its atmosphere gets much, much hotter the farther it stretches from the sun’s blazing surface”.

The spacecraft will make use of an 8ft-long heat shield known as the Thermal Protection System (TPS), which has been made using a carbon composite coated with ceramic to cope with the extreme conditions and temperature fluctuations.

Nasa says the TPS has been tested to withstand temperatures of up to 1,650 degrees and “can handle any heat the sun can send its way”.

Poking out over the heat shield, an instrument known as the Faraday cup will take measurements of the solar winds, a flow of ionised gases from the sun that streams past Earth at a million miles per hour.

Understanding more about solar activity could help scientists forecast the large eruptions from the sun that pose a threat to satellite and communications systems. - PA