Ireland’s agriculture emissions are hurtling in the wrong direction 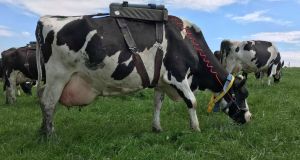 A cow with methane-collection equipment on her back. Grass is a cheap way to feed cows, but as methanogens break down grass in the stomach they produce methane, a potent greenhouse gas Photograph: Rachel Doyle

Taoiseach Leo Varadkar admitted to the European Parliament in January what climate activists have long known: Ireland’s performance on climate change is abysmal. “As far as I am concerned,” he said, “we are a laggard.”

If only. When it comes to emissions Ireland is no laggard. At least a laggard moves. There isn’t a hope that Ireland’s obligatory EU reduction targets for 2020 will be met, and the prospect of reaching our 2030 targets is dismal.

A big player in this story is agriculture. As the Taoiseach said, a “huge amount” of our emissions – just over a third – comes from farming. EPA scientists predict these emissions will continue to rise.

In 2014, ex-taoiseach Enda Kenny’s government made a decision: by 2050 Irish agriculture would become “carbon neutral”. That is to say, the amount of greenhouse gases from farming would equal the amount of CO2 that’s sucked out of the atmosphere by the land – eg by trees or grasslands.

This is mainly a cow issue. Grass is a cheap way to feed cows but they can’t digest it without the help of microbes in their stomachs called methanogens. In return for breaking down grass, methanogens produce methane – a potent greenhouse gas – which is burped out by the cow.

Methane stays in the atmosphere for 12 years and traps heat like a dry sponge soaks up water, and this warms the atmosphere and causes temperatures to increase.

Cows also expel manure which decomposes and produces another greenhouse gas – nitrous-oxide – which soaks up vast amounts of heat and remains in the atmosphere for 120 years.

As farms intensify, greenhouse gases increase. They are impossible for farmers to shake off because the plan is to grow the national herd; by 2030 there will be a 22 per cent increase in dairy cows.

According to Pete Smith, professor of soil science at the University of Aberdeen, you need to do the obvious – reduce the herd.

“If you take one cow out of the equation, that’s one lifetime of methane emissions you remove from the picture. If you’re only thinking about the climate, you would remove the animals. But it’s not as simple as that.”

Dairy and beef expansion has been extremely profitable for the industry. A lot of public money has been spent to make it happen. Many farmers acutely felt the pressure to get big or get out; they’re now locked into loan repayments which financed their expansion. Cutting, or even stabilising, cow numbers is not on the Government’s agenda. Livestock expansion is an article of faith.

How can agriculture approach the holy grail of carbon neutrality?

But as farmers reduce emissions by becoming more efficient they will be tempted, understandably, to increase cow numbers to make more money. Reducing emissions can, perversely, drive expansion. Climate expert Phillip O’Brien from the EPA is clear: if cow numbers keep increasing there’s little chance of getting emissions down.

This puts a lot of pressure on finding places to store carbon – in trees, peatlands and grasslands – but there is a limited amount of land that can be given over to this job.

Is it time that 'carbon farmers', who soak up CO2, are given similar subsides for their efforts?

In 2013, Teagasc scientists said that to approach carbon neutrality we would need to plant 20,000 hectares of trees every year. The Department of Agriculture committed just under €500 million of public money to an afforestation scheme, but planting rates are below target.

Some community groups, particularly in Leitrim, have vociferously opposed the sitka spruce plantations that have cropped up in their areas, while Pete Smith says that sitka spruce trees are not great for biodiversity. “Mixed woodland would be better,” he says.

Farmers are given public money, through subsidies, to produce food. Is it time that “carbon farmers”, who soak up CO2, are given similar subsides for their efforts?

“In the forest the carbon goes into the wood. In grasslands it goes into the soil through the roots,” says O’Brien. “We need more trees in our farms and more consideration of hedgerows. We need to build a more climate-sensitive landscape.”

Someone who has turned his land into a carbon sponge is David Laughlin, a beef and dairy farmer from Coleraine, Co Derry. He planted a native woodland which sucks up 1,600 tonnes of carbon every year. He stopped using artificial fertilisers (reducing his nitrous-oxide emissions) and grows clover instead. It is a nutritious, high-protein food for cows that fixes nitrogen in the soil and does not require artificial fertilisers to grow.

“Fertiliser companies have put so much money into research and advertising, everyone thinks it’s the answer,” he says. “It’s not the answer or the nirvana for farmers. Establishing clover in your field takes time and management, but once you learn how to do it it’s easy”.

He warns against the dangers of further expansion, and says the risk to Irish farmers – and the climate – is too great. “Our business leaders have come up with the term ‘sustainable intensification’ but it’s an oxymoron. It doesn’t work. Farmers have more problems and less profit.”

Intensification may cause problems for single-celled organisms called “methanotrophs”. They live in the soil and gobble up methane when they find it. Rich forest soils are packed with these organisms – as are intact grasslands – but when the soil is ploughed and artificial fertiliser is spread they are disturbed. Could farmers be incentivised to limit soil disturbance and use methods to encourage these methanotrophs? It’s an intriguing prospect.

Ultimately, says O’Brien, the land can’t cope if too much is asked of it. “The more intensive you are, the more likely you’ve gone beyond environmental sustainability at farm level. There are upper limits to what the land can produce.”

Dr Gary Lanigan, a climate scientist in Teagasc, says the way forward is clear but not easy. “We need more bioenergy, more on-farm renewables, more forestry, more restoration of wetlands, and as much agriculture mitigation as you can get.

“After that the hard questions kick in: what type and intensity of agriculture do we want by 2050? And if we decide to decrease this activity, what will we replace it with?”

The business case for reducing emissions is overwhelming; buyers of Irish food are cranking up the pressure for marketing claims about sustainability to be backed by robust science. Emissions going in the right direction – downwards – is an obvious start.

If they continue to rise, mud may stick. Rogier Schulte, professor of farming systems ecology at Wageningen University in the Netherlands, says the Government must deal with this issue.

“Irish beef and dairy is marketed globally under a premium label. In Dutch supermarkets Irish products used to be the only one in the premium section, but now there’s lots of competition.”

The expansion policies of Food Harvest 2020 and Food Wise 2025 have been decisively executed. But agriculture emissions are hurtling in the wrong direction. Farmers urgently need a workable plan to reduce them, while ensuring they can make a living for their families, have an acceptable work/life balance and pay their debts from expansion.

The Taoiseach declared he was not proud of the Government’s performance on climate change. His eyes are firmly fixed on somehow meeting our 2030 reduction targets. The alternative – Irish taxpayers incurring enormous fines, and the prospect of Irish beef and dairy being produced by a country regarded as the dirtiest emitter in Europe – is too serious to ignore.

1 Six weeks of Level 5: Non-essential shops to close, no visitors to homes and a 5km travel limit
2 Life under Level 5: What will the next six weeks look like for the State?
3 Covid-19: State moves to Level 5 for six weeks with hopes of ‘meaningful’ Christmas celebrations
4 Coronavirus: Why Level 3 failed and why Level 5 might too
5 Suzanne Lynch’s US Election Diary: Trump suffers debate blow amid trailing polls
Real news has value SUBSCRIBE