The Parker Solar Probe will get within 3.8 million miles of the surface, allowing scientists to explore the sun in a way never before possible 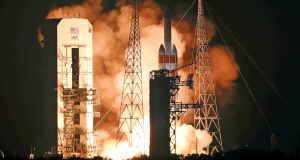 A Nasa spacecraft is heading towards the sun on an unprecedented quest to get closer to our star than anything ever sent before.

As soon as this autumn, the Parker Solar Probe will fly straight through the wispy edges of the sun’s corona, or outer atmosphere, that was visible during last August’s total solar eclipse.

It will eventually get within 3.8 million miles of the surface in the years ahead, staying comfortably cool despite the extreme heat and radiation, and allowing scientists to vicariously explore the sun in a way never before possible.

“All I can say is, ‘Wow, here we go’. We’re in for some learning over the next several years,” said Eugene Parker, the 91-year-old astrophysicist after whom the spacecraft is named.

Protected by a revolutionary new carbon heat shield and other high-tech wonders, the spacecraft will fly past Venus in October. That will set up the first solar encounter in November.

Altogether, the Parker probe will make 24 close approaches to the sun on the seven-year mission.

For the second straight day, thousands of spectators jammed the launch site in the middle of the night as well as surrounding towns, including Mr Parker and his family.

He proposed the existence of solar wind — a steady, supersonic stream of particles blasting off the sun — 60 years ago.

It was the first time Nasa named a spacecraft after someone still alive, and Mr Parker was not about to let it take off without him.

The Delta IV Heavy rocket thundered into the pre-dawn darkness, thrilling onlookers for miles around as it climbed through a clear, star-studded sky.

Nasa needed the mighty 23-story rocket, plus a third stage, to get the diminutive Parker probe — the size of a small car and well under a ton — racing toward the sun.

From Earth, it is 93 million miles to the sun, and the Parker probe will be within 4 per cent of that distance at its closest. That will be seven times closer than previous spacecraft.

It was the first rocket launch ever witnessed by Mr Parker, professor emeritus at the University of Chicago. He came away impressed, saying it was like looking at the Taj Mahal for years in photos and then beholding “the real thing” in India.

“I really have to turn from biting my nails in getting it launched, to thinking about all the interesting things which I don’t know yet and which will be made clear, I assume, over the next five or six or seven years,” Mr Parker said on Nasa TV.

Nasa’s science mission chief, Thomas Zurbuchen, was thrilled not only with the launch, but Mr Parker’s presence.

“I’m in awe,” Mr Zurbuchen said. “What a milestone. Also what’s so cool is hanging out with Parker during all this and seeing his emotion, too.” - PA