Digging into plants of the past 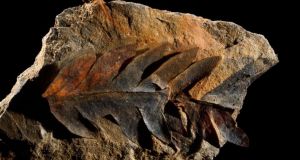 What can we learn from fossil plants and pollen? Plenty, it turns out, including how the Earth “greened” and how plants survived past periods of climate change.

Those topics and more will be discussed at a series of public talks on August 13th during the European Palaeobotany and Palynology Conference in Dublin.

“Paleobotany involves using fossil plants, including wood, leaves and flowers, to interpret environments of the past,” says conference chair Prof Jennifer McElwain, professor of botany at Trinity College Dublin. “Palynology is the study of fossil pollen and spores, they can help us to date findings back across the evolutionary development of plants.”

Fossils have helped scientist to understand how the Earth “greened” or became occupied by plants, and how plants have responded to times of climate change in the past, she adds. “If we can understand the resilience of plants in the past, we can perhaps get insights into strategies for plants to face up to the stresses related to current period of rapid climate change.”

Several speakers at the conference will give public talks, including Prof Claire Belcher from the University of Exeter, whose work on charcoal in the fossil record is helping to piece together wildfire histories from hundreds of millions of years ago.

“Fire is a natural process, and we want to understand its impact on global vegetation and its evolution,” McElwain says . “[Prof Blecher] uses fossil charcoal as evidence of fires in the past, and she is finding strong links between fires and the oxygen content of the atmosphere, which has changed over evolutionary time.”

From one extreme to another: Ireland’s vegetation has been shaped by the waxing and waning of ice sheets, a topic that Prof Peter Coxon from Trinity College Dublin will explore, while Dr Benjamin Bomfleur from the University of Münster in Germany will talk about the plants of the Antarctic, which assumed its current icy mantle relatively recently, says McElwain. “The Antarctic has been ice-free for much of geologic time, and there is evidence of cycads and trees growing there,” she says.

Prof Jane Stout from TCD will look at how modern pollen studies can tell us about ancient plant biology and environments, while Prof Caroline Strömberg from the University of Washington will talk about how tiny shards of silica preserved in fossil grasses can give us new insights into the evolution of this important group of plants.

Speaker Dr Leyla Seyfullah from the University of Göttingen in Germany looks to a different source for otherwise elusive fossils: amber, or fossilised resin that has preserved delicate life forms such as insects, frogs and flowers. “It’s the only record of body fossils for some of these organisms,” says McElwain. “And we can even look at the chemistry of the gas bubbles trapped by the amber.”

The public session of EPPC2018 will take place on August 13th from 9am to 12.30pm at O’Reilly Hall, University College Dublin, Belfield – tickets for six talks and coffee cost €25. For more information and to book, see www.eppc2018.ie