How tuning in to music can stimulate the brain 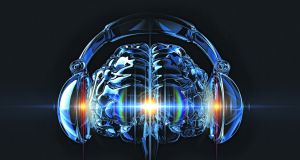 The human capacity to build cognitive reserve (ways to protect the brain against memory loss) has become a prominent area of research in dementia. There have been several studies showing the benefits of physical exercise and brain-teasers to help people keep their brains active as they age.

But, does music have a role to play in protecting the brain from cognitive decline? And can playing or listening to music improve the quality of life of people with dementia?

Music and memory is the research interest of neuroscientist Dr Catherine Jordan, who is an Atlantic Fellow at the Global Brain Health Institute in Trinity College Dublin. She spoke recently at the Neurohumanities lunchtime lecture on memory in TCD; one of a series of talks in advance of the Schrödinger at 75 – The Future of Biology conference at the National Concert Hall in September, which commemorates the 75th anniversary of Nobel-prize winning physicist’s Erwin Schrödinger’s seminal What is Life? lectures in 1943.

As an Atlantic Fellow for equity in brain health, Dr Jordan has a specific mandate to seek social and public-health solutions to reduce the scale and impact of dementia. “We already know from studies that performing music protects against dementia. Performing itself builds up cognitive reserve and delays the onset [of dementia] for 4.5 years, which is similar to the effect of bilingualism,” she explains.

Researchers have found that playing a musical instrument engages motor, auditory and visual parts of the brain which results in more grey matter – the clusters of neurons in the brain and spinal cord. “Music engages higher order cognitive functions such as organising and monitoring and brain images have shown a larger corpus callosum – the bridge between the two brain hemispheres – in musicians. This means that neurons can fire more efficiently and use more diverse routes between the two hemispheres,” Jordan explains.

Researchers have also found that musical memory is one of the last types of memory people with dementia lose. And some studies, including Jordan’s PhD research at the University of Edinburgh, have found some theoretical evidence to suggest musical memories are stored in a different part of the brain to other forms of memory.

But, how can this understanding of the durability of musical memory be used to help people with dementia? The American documentary Alive Inside tells the story of a project where music has been used in care homes for people with dementia. “This music and memory project has seen huge transformations in people in care homes when they are given iPods with personally meaningful music to listen to,” Jordan adds.

Readers can view a poignant example of the Alive Inside programme on the YoutTube clip of Henry, a jazz musician with dementia, who begins to speak much more coherently when listening to his favourite music on an iPod.

Spurred on by the success of Alive Inside, UK writer and broadcaster Sally Magnusson founded Playlist for Life after she witnessed the effect of music on her late mother’s dementia. Playlist for Life – playlistforlife.org.uk – now trains people how to become “music detectives” to select appropriate music for people with dementia to listen to.

“If the person is in the early stages of dementia, you can talk to him/her about the music in the charts when they were younger or if they played an instrument or sang in a church or community choir,” explains Jordan, who did the training with Playlist for Life in Glasgow, Scotland.

Creating such playlists is something that family members of people with dementia can also do for them. “It’s all about looking for clues for the most poignant autobiographical memories in [what’s called] the reminiscence bump between the ages of 10 and 30 years,” Jordan adds.

“Autobiographical memories are disproportionately recalled for events in late adolescence and early adulthood and music has been found to be a very powerful cue to retrieve such memories which are associated with strong emotions and feelings of nostalgia,” she says. People with dementia who are given access to these personalised playlists have shown reduced symptoms of anxiety and stress.

Keen to develop more scientific evidence for the benefits that listening to personally meaningful music can bestow on people with dementia, Dr Jordan will start some new research in September, 2018. This study will look at the effects of familiar music on the brain using brain-imaging scans. More specifically, she will compare brain scans of people with dementia and those without dementia to see if there are differences when both groups listen to music they enjoy. She is currently recruiting healthy older adults as the control group for this study – and can be contacted at Catherine.jordan@gbhi.org.

There are many researchers around the world studying the links between music and the brain. In the UK, a recent Commission on Music and Dementia brought together for the first time academic papers and written and oral evidence on the significant benefits of music to people with dementia.

On the publication of the International Longevity Centre’s report in January 2018, Sally Bowell, research fellow at the International Longevity Centre said: “Music should not just be considered a nice-to-have, or an ‘add-on’. Music has tangible, evidence-based benefits for people with dementia, such as helping to minimise the behavioural and psychological symptoms of dementia, tackling depression and anxiety, and, importantly, helping to improve quality of life.”

Jordan is now keen to develop a network of researchers, music therapists and performing musicians to develop evidence on the links between music and memory in Ireland. “Research into music and the brain is well established in other countries but it’s a new research area in Ireland,” she notes.