Beautiful coral species were captured at depths of up to 2,991m off the west coast of Ireland. Video: Marine Institute 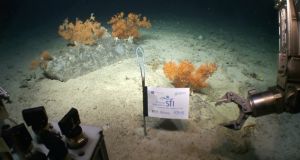 A vast under-water canyon extending to a depth of 3,000m has been mapped on the edge of Ireland’s Continental Shelf.

An enormous submarine canyon 3,000m deep has been mapped on the edge of Ireland’s Continental Shelf by scientists aboard the State research ship RV Celtic Explorer.

The canyon, some 320km (200 miles) west of the north Kerry coast, is a “natural laboratory” to take the pulse of a “changing Atlantic”, says Dr Lim.

The research expedition, which is due to return to Galway on Friday, mapped 1,800sq km of seabed over a fortnight, using the Marine Institute’s remotely operated vehicle (ROV), Holland 1.

Scientists say the upper canyon is full of cold-water corals, forming reefs and mounds that create a rim on the lip of the ravine 30m tall and 28 km long. The reefs on the rim eventually break off and slide down into the canyon where they form an accumulation of coral rubble deeper within the gorge.

The ROV ventured deeper into the canyon and found significant build-ups of coral debris that have fallen from hundreds of metres above.

UCC scientist Prof Andy Wheeler says the corals obtain their carbon from “dead plankton raining down from the ocean surface; so, ultimately, from our atmosphere. Increasing CO2 concentrations in our atmosphere are causing our extreme weather. Oceans absorb this CO2 and canyons are a rapid route for pumping it into the deep ocean where it is safely stored away.”

The team’s new detailed maps show a rim around the lip of the canyon at about 600m comprising a “profusion” of cold water corals. The maps also show lobes of sediment debris, along with the scars from slides as the walls collapse.

The scientists say exposure of old crustal bedrock and incised channels in the canyon floor has been carved by sediment avalanches.

“We took cores with the ROV. And the sediments reveal that although the canyon is quiet now, periodically it is a violent place where the seabed gets ripped up and eroded,” says Prof Wheeler.

The research – supported by the Marine Institute – was funded by the Science Foundation of Ireland, Geological Survey Ireland and contributes to projects in the Irish Centre of Research in Applied Geosciences.

Prof Wheeler’s marine geology research group in UCC is undertaking a project to monitor coral habitats within the canyon so as to understand “what drives these habitats, how they change through time and how sensitive they are to disturbances”.

The discovery comes just several weeks after Irish and British scientists reported rare and newly discovered deep-water coral, and an entire reef of sponges, off the Irish west coast.

A type of “black coral” identified on the mission may be an entirely new species, according to Marine Institute expedition chief scientist David O’Sullivan and Prof Louise Allcock of NUI Galway.

The sponge reef is the first habitat of its type discovered in Irish waters, and matched only by a similar reef in Canadian waters.

Several firsts in Irish waters recorded by that team included a species of “octocoral” of the genus Corallium, comprising large fans with a fragile “porcelain-like” skeleton.

The recent three-week mission led by the Marine Institute on the Irish Lights ship Granuaile undertook an audit of the Irish deep-sea environment in areas up to 300 nautical miles from Galway.

Images captured on the Porcupine and Rockall Banks were recorded to a depth of up to 2,991m, using the high definition camera on the Holland 1.