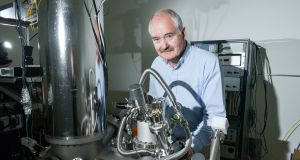 Prof John Boland working on nanowires, that mimic nerve cells in the brain at the AMBER research facility in TCD. Photograph: SHARPPIX

A new generation of “neuromorphic” computers will be able to carry out ultra-fast sensory processing, image recognition, and motor control, prompting movement tasks which are natural to the human brain.

At the core of these computers are nanowire networks, made of microscopic threads of nickel or silver, that “mimic the brain” in how they send and process information.

Nanowires are similar to normal electrical wires but are extremely small – typically a few hundred atoms thick, or less than one thousandth of the thickness of a human hair.

They are used in “neuromorphic” computers which are predicted to be the next frontier in the evolution of artificial intelligence (AI) and machine learning.

While the remarkable properties of these “nanowires” in processing information has been known for some time, the extent to which they mimic how the human brain works has been further underlined by new research from a team of Irish and US scientists.

Researchers at AMBER, the Science Foundation Ireland-funded materials science centre, have provided further evidence of the effectiveness of nanowire networks and found a key pathway that may optimise information flow in neuromorphic computers.

The difference between neuromorphic semi-conductors and standard computer semiconductors lies in the way their transistors are laid out and inter-related. They are powered by billions of transistors arranged to work in parallel across what is being called “inter-neuron connections”.

These operate like synapses, the junctions between nerve cells in the central nervous system and brain.

Establishing the optimum pathway to operate across complex networks is a ubiquitous problem: from information networks such as the internet to physical networks of roadways to highly interconnected biological networks within the brain.

To be able to do so quickly and in an energy-efficient way is critical in developing next-generation computers.

In research published on Monday the journal Nature Communications researchers describe how this may be achieved in the development of hardware using “neural network systems with brain-inspired architectures”.

The human brain develops preferred communication pathways that link together different brain circuits or loops to quickly and efficiently complete specific tasks and this research shows evidence for the same behaviour in a nanowire network.

Prof Boland explained: “To understand preferred pathways, think of walking through a university campus or business park with some grassy areas and paths connecting the different buildings. There will be foot-worn short cuts in the grass that people take to save time and energy. The combination of frequently-used paved and unpaved pathways are the most practical or preferred pathways for moving efficiently.”

The research was supported by the European Research Council. AMBER is jointly hosted in TCD by the CRANN Institute and Trinity Centre for Bioengineering, which work in conjunction with UCC and the Royal College of Surgeons in Ireland.

Church of Ireland bishops approve ‘Taking the Knee’ ceremony 16:23
Risk of localised flooding as yellow warning issued for several counties 16:18
Many secondary students lack access to online learning amid Covid-19 pandemic 16:05
Home of The O’Rahilly should not have been demolished, Taoiseach says 15:48
Rise in cost of renting slows as impact of Covid-19 begins to hit 15:32