The future of food production processes: animal, vegetable or cell?

With livestock being phased out, changes in how food is produced are set to be dramatic 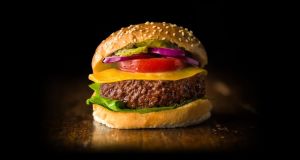 If you convert the meat on an average Irish cow carcass (about 210 kilos of meat) into hamburgers, it would equal about 1,825 quarter pounders

Food has not changed much in the past decade. A Sunday roast or mid-week dinner might have new takes or added exotica. But the expected meat and veg are basically all there. If scientists have it right, changes over the next decade will be more dramatic.

From conception to birth, getting milk from a cow takes nine months. To get that milk, calves are removed almost immediately after birth – an anathema for animal rights organisations.

Despite the advantages, many may gag at the thought of plant milks

Both the Irish Creamery and Milk Suppliers Association (ICMSA) and Teagasc say the practice has a range of advantages, however. “It lowers the risk of disease and it is less distressing for the dam as they form less of a bond. It also means we can be sure they get the three litres of colostrum they need,” said Teagasc dairy specialist, George Ramsbottom.

The ICMSA further noted in a recent email that where a cow’s “separation distress system” is activated they “can be mediated by brain opioids.” This is unlikely to calm the welfare waters.

Intubation of calves is another animal rights issue and, while the ICMSA says colostrum is delivered to newborns by bottle 98 per cent of the time, a document from Teagasc showing farmers how to intubate calves says it is “not uncommon for farmers to stomach tube all calves immediately after birth”. Nor is it easy, “incorrect stomach tubing can severely damage the calf and be fatal”.

Other issues created by Ireland’s cows and livestock include greenhouse gas (GHG), ammonia pollution and antibiotic resistance issues. To ameliorate the last, particularly prophylactic use of antibiotics for drying off cows, Teagasc says it is working to reduce the practice but easy substitutes are lacking.

The process of getting milk from oats, or other plants, is considerably shorter, and raises no animal welfare, GHG, pollution or antibiotic difficulties. Oat growth takes about five months and the milk-making process a few hours. Other differences, says Swedish oat milk producer Oatly, are that they use about 80 per cent less land per litre of milk, compared to the land needed to feed cows.

Despite the advantages, many may gag at the thought of plant milks. In that case, the answer may lie in another new food process: recombinant cell protein production. This involves putting cow DNA into micro-organisms (eg bacteria, algae or yeast). Once inserted, the DNA tells the organism what to produce. LegenDairy Foods GmbH, a German start-up, is using the process to tell micro-organisms to produce milk proteins such as casein and whey. The process, which happens mainly in fermentation tanks, takes about two weeks, says its chief executive Raffael Wohlgensinger.

Like most cellular agriculture processes, it already works at small scale. The challenge is to reach mass production. Wohlgensinger estimates it might take three years to reach consumers. In cost terms, LegenDairy milk might be about three to four times that of cow milk, meaning it will likely enter the supply chain at niche or restaurant level. Further out, Wohlgensinger believes it will be cost competitive or cheaper than animal dairy, mainly thanks to speed to market; lower labour and resource costs and shorter supply chains as production centres can be built closer to consumers.

The story for meat is similar. From insemination to slaughter, takes an Irish cow about three years. For a plant burger, Moving Mountains Foods, which recently launched in Irish restaurants, says seed to table takes three to six months. Skipping the cow means less pollution, water and land use.

It also means more burgers, explains CEO Simeon Van der Molen. If you convert the meat on an average Irish cow carcass (about 210 kilos of meat) into hamburgers, it would equal about 1,825 quarter pounders, each one about 115 grams. Van der Molen said it would take Moving Mountains 12 months at most to produce the same 1,825 burgers.

Meanwhile, a study by Impossible Foods, makers of the plant-based Impossible Burger says their latest burger, which costs $2.00 to $3.00 in US fast food outlets, uses “87 per cent less water, 96 per cent less land, and produces 89 per cent fewer GHG emissions than the animal version”.

The cow used in the Impossible Burger study is a feedlot cow, which is more efficient, if less humane, than Irish grass-fed cattle. “As a rule of thumb, the nicer life is for the cow, the worse that cow’s individual impacts are on the environment,” says Impossible Foods impact strategy manager Rebekah Moses.

Alan Matthews, emeritus professor of European agricultural policy at Trinity College Dublin, points out, however, that grass-fed cows usefully convert inedible forage into human food. Shifting to grain, he said, is nutritionally inefficient and competes with human supplies. “But, as animal protein is more highly valued and enjoyed, it makes economic sense.” As well as reducing pressure on global land and water resources “some reduction in meat and dairy intake would also be good for our health, according to the recommendations of dietary authorities,” Matthews adds.

Cellular meat, where cow or other livestock cells are replicated in fermentation tanks filled with nutritional broth, could be even quicker to produce and have health benefits – mainly because fat content and type can be adjusted. “It takes 10 weeks to make one [beef] burger, but due to exponential cell growth, it only takes 12 weeks to make 100,000 burgers,” says Mosa Meat’s chief scientific officer Mark Post.

Post was the first person to grow a burger, which he presented to the world in 2013. His production process, which uses primary stem cells, relies on the existence of cows to provide regular biopsies, but far fewer. “We have about 1.5 billion cows on the planet now. With cell-based, that could be a few hundred, although 30,000 is probably a good number for global herd health,” Post adds. One slight drawback, compared to cows, is that mass production is non-existent as yet.

Mosa Meat burgers should be available in a few years in restaurants and supermarket supplies will follow, he says. Two recent developments might shorten that timeline and improve commercial potential.

An even newer method on the horizon is producing protein from water, CO2, micronutrients and electricity

First, a tank replacement. Cellular Agriculture Ltd CEO and farmer, Illtud Dunsford, says compared to the 15,000 to 20,000 litre vats needed for commercial cellular agriculture, his hollow fibre membrane bioreactor will do the same thing at 200th of the volume.

Contamination risks that come with bigger tanks will shrink too. From an agricultural perspective, Dunsford sees farmers not only managing the smaller herds, but also producing grass to make bioreactor “scaffolds” that most cellular agriculture processes use.

The other development is interest from animal feed suppliers in producing the nutritional broth. A move that makes sense if cells replace livestock. Currently, broth suppliers are mainly biomedical, meaning they are costly and small scale.

Describing her pork production timeline, Higher Steaks CEO Benjamina Bollag says it takes about four to six weeks, compared to a pig which takes about six months. Bollag uses “induced pluripotent stem cells”, which are taken from the animal one time only. As with Mosa Meats, cells are expanded in a bioreactor filled with nutritional broth, which, she agreed, is a huge challenge in cost terms.

Finless Foods, a cellular fish producer, confirms the same scenario. Its CEO Mike Selden says their process takes about a week to make a basic fish finger and relies on cell immortalisation: “Which basically means the cells have passed the Hayflick Limit of replication,” meaning they can continue to divide forever, essentially removing the need for live fish as cell sources. The process is done only once for each fish species.

By comparison, the fastest growing fish in aquaculture terms is salmon. “To get to edible weight you need about two years,” Selden said. Compared to wild-caught fish, cellular versions will additionally be free of mercury, microplastic, sea lice and PCBs. Getting to an affordable price might take a bit longer than salmon, though. The current cost of production, as of 2017, is about $19,000 per pound of fish flesh, Selden said.

An even newer method on the horizon is producing protein from water, CO2, micronutrients and electricity. “The difference between this and recombinant proteins is you don’t even need to grow the sugar,” explained Prof Hanna Tuomisto of Helsinki University. Her speciality is the sustainability of new food production technologies.

The end result, already available from Finland’s Solar Foods, is a powder that can be used in a 3D food printer, eaten directly or mixed into soup, shakes, burgers and other foods. Pasi Vainikka of Solar Foods expects to be on the market by 2021 as an ingredient “in a known consumer product”. His greatest challenge is neither scale-up nor broth, but regulation, which takes about two years under the EU’s novel food approval process.

Vainikka said a full-scale fermentation facility could cost effectively produce 1.5 tonnes of protein powder per hour. The current livestock equivalent for that is unknown but assumed large.